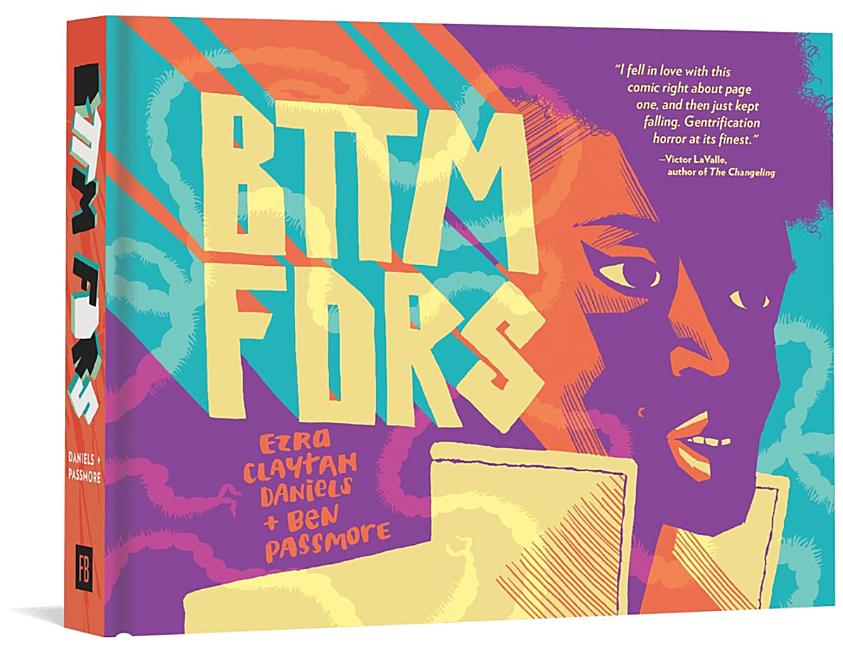 What The Reviewers Say
Positive M. Delmonico Connolly,
Full Stop
Most striking about BTTM FDRS is the illustrator Ben Passmore’s use of flat coloring, with which he is able to create the drama and tension needed for horror. Constraining himself to just one or two colors (I want to say that the colors themselves are exciting and characteristically distinct), Passmore trains your eye toward objects and apertures ... a brilliant scheme for a horror book ... As the narrative tension builds, color, its reduction to pinpoint attention and explosion, scores the book emotionally ... As the narrative tension builds, color, its reduction to pinpoint attention and explosion, scores the book emotionally. At times, Passmore’s colors break out kinetically into three or four shades and we get the visual sense of an argument, of differentiation, of conflict or the mental chaos of coming face to face with something incomprehensibly monstrous. At other times we see a figure illuminated in a flashlight’s circle with only a dim sense of something out there beyond the light.
Read Full Review >>
Positive Dan Schindel,
Hyperallergic
... a coy, gruesome satire of gentrification. Taking place in the fictional Chicago neighborhood Bottomyards (riffing on Back of the Yards), it blends discussions around race relations, cultural appropriation, and urban injustice with a creepy plot ... While there are plenty of broad (and funny) jabs at artwashing, hipsters, and both NIMBYs and YIMBYs, the book doesn’t settle for an easy examination of the issues at hand ... BTTM FDRS...melds social horror with body horror, as the thing in the apartment building integrates its inhabitants, the gentrified space literally consuming humanity ... Passmore’s artwork skillfully balances the wry comedy with the escalating scary moments. The key to body horror is to make sure it’s properly gross, and he concocts some terrifically vile-looking creatures and scenarios ... Passmore’s colors, often working with just a few tones in any given scene, evocatively convey the feel of each scene and location. In comics, great scares often rely on alarming panel transitions or page break cliffhangers, and the book skillfully utilizes these as well ... Beyond the creepiness, there’s unease underlying BTTM FDRS ... Unresolved questions are more haunting than any lurking creature.
Read Full Review >>
Positive Publishers Weekly
This sharply observed satire stars a monstrous physical manifestation born of the evils of racism, gentrification, and cultural appropriation ... Passmore...a skilled visual stylist with a particularly fine, bright palette, ably renders the humor in the horror and the horror in the humor (the story’s title has a nasty double meaning). The book pokes fun at the zeitgeist with a sharp stick in a manner reminiscent of Jordan Peele’s film Get Out.
Read Full Review >>
See All Reviews >>
What did you think of BTTM FDRS?
© LitHub | Privacy