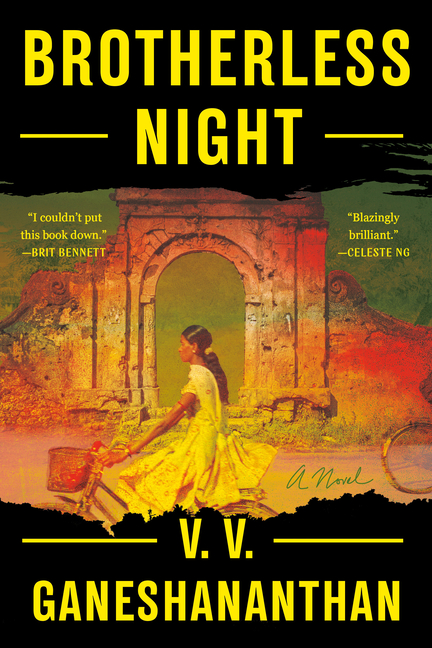 Jaffna, 1981. Sixteen-year-old Sashi wants to become a doctor. But over the next decade, a vicious civil war tears through her home, and her dream spins off course as she sees her four beloved brothers and their friend K swept up in the mounting violence. Desperate to act, Sashi accepts K's invitation to work as a medic at a field hospital for the militant Tamil Tigers, who, following years of state discrimination and violence, are fighting for a separate homeland for Sri Lanka's Tamil minority. But after the Tigers murder one of her teachers and Indian peacekeepers arrive only to commit further atrocities, Sashi begins to question where she stands. When one of her medical school professors, a Tamil feminist and dissident, invites her to join a secret project documenting human rights violations, she embarks on a dangerous path that will change her forever.

What The Reviewers Say
Rave Omar El Akkad,
The New York Times Book Review
Perhaps Ganeshananthan’s finest achievement in Brotherless Night is showing, with meticulous accuracy, what it feels like to inhabit a day-to-day life onto which someone else, from the privilege of great distance, can throw a word like 'terrorism,' and be done ... Ganeshananthan is a writer of remarkable restraint. Occasionally a precious exclamation mark finds its way into an especially cataclysmic scene, or the narrator might feel the air rushing out of her lungs or her hand involuntarily covering her mouth at the news of a loved one’s death; but otherwise the prose is almost unsatisfyingly steady. And yet, in tone and emotional register, Sashi’s storytelling is a perfect fit for the delicate balance she is forced to walk by virtue of living in a society where running afoul of the dominant forces, saying the wrong thing, leveling too impassioned a rebuke, can prove a capital offense ... The narrator’s deliberative mode of describing her life feels, by the end of the novel, like the only way this story could have been told ... And when she wants to, Ganeshananthan can loosen her restraint to pull off gorgeous sentences.
Read Full Review >>
Rave May-lee Chai,
The Star Tribune
Propulsive ... Ganeshananthan's attention to the small details of love, of caring, of human empathy make the reader feel deeply for all her characters ... Riveting, heartbreaking and extraordinary for both its empathetic gaze and its clear-eyed depiction of the brutality of war, Brotherless Night is a masterpiece.
Read Full Review >>
Rave Eric Ponce,
BookPage
The novel begins by immediately challenging our assumptions and vocabularies ... Through this moving story, Ganeshananthan traces the human aspects of war—the physical losses and tragedies as well as the conflicts of values that are often the true battlefields. Rather than justifying or lamenting the horrors of a civil war that ended a little over a decade ago, she shows that by focusing on all of the people involved, both 'good' and 'bad,' we can learn how and why humans fight—and why it’s so important to stop the cycle.
Read Full Review >>
See All Reviews >>
SIMILAR BOOKS
Coming Soon