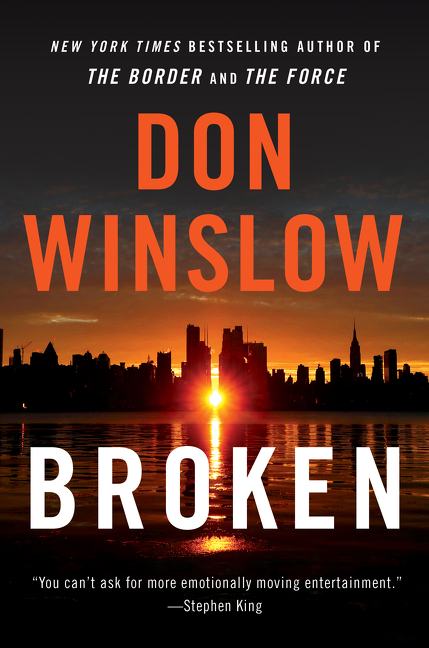 What The Reviewers Say
Positive Janet Maslin,
The New York Times Book Review
If you’ve read only a few of Don Winslow’s books, you may not realize what a shape-shifter he is ...Winslow has now delivered a collection of six novellas that show off his range. It’s called Broken, after the first (and weakest) story in the bunch. A better title might have come from the next one, 'Crime 101' — an elegantly choreographed pas de deux that is dedicated to 'Mr. Steve McQueen', and that lives up to that level of cool. It certainly captures Winslow’s stature as a writer from whom others can learn the ropes ... The feeling of brokenness is palpable here, and it’s a big part of the author’s sensibility when he isn’t being clever ... 'Broken,' the novella that opens the book...[is] well executed and propulsive, but its unalloyed viciousness makes it a tough read for the moment ... 'Broken' would work better if it had more context. But there’s only so much Winslow can do with a 60-page format and a lot of varied physical damage on the menu.
Read Full Review >>
Mixed Alex Sorondo,
The Open Letters Review
Like a home run derby or an all-star game where great talent turns up to flex and pivot, to dazzle the audience with a low-stakes performance, Don Winslow’s new story collection is an enjoyable showcase of the author’s myriad talents, but it’s missing something you might have come to expect from his recent work: it’s missing the sense of risk ... what we get here with Broken is the portrait of an author having fun ... opening story, 'Broken', is both a skilled piece of writing and the worst thing in the book: the story is fast-paced, it’s exciting, and it ends with a brilliantly orchestrated crescendo of violence—but it amounts to nothing more than noise and blood, a watered-down version of Winslow’s epic NYPD novel from 2016, The Force...It’s a harrowing start to the book, because it raises the question of whether an author of ambitious tomes can forget the subtler craft of a small-scale story ... There’s definitely an urgency, in Broken, of somebody frothing with stories to tell; these are, in fact, novellas, if you wanna get technical, and every single one feels like it could have been a novel but for the fact that its author’s appreciative of the fact that you and he both only have so much time on this earth ... It’s a testament to a writer’s talent when the most scathing thing you can say about his latest release is that it isn’t as good as his last one ... If somebody proves to be great company, as Winslow certainly has over the years, you take that company as readily for a three-course meal as you do for a beer...Broken goes down more like a beer. A good one.
Read Full Review >>
Positive G. Robert Frazier,
The Nashville Scene
Winslow takes a breather from the intensely dark depictions of violence in his Cartel crime trilogy, but he still provides plenty of action to satisfy readers. The six little doses of crime fiction here run the gamut from gritty, bloody thrillers to a humorous encounter with a gun-wielding chimpanzee ... The bulk of the tales here include serious and cautionary themes of corruption, vengeance, loss and redemption. But time and again, Winslow creates deeply believable characters by highlighting their desires and the setbacks to fulfilling those desires — goals to which readers can easily relate ... Longtime readers will be especially happy to see some of his recurring characters making return appearances here...But rest assured, if you haven’t encountered Winslow’s cast before, you won’t feel lost. Winslow takes deliberate care to make each character and story stand alone.
Read Full Review >>
See All Reviews >>
SIMILAR BOOKS
Fiction

The Lamplighters
Emma Stonex
Rave
What did you think of Broken?
© LitHub | Privacy