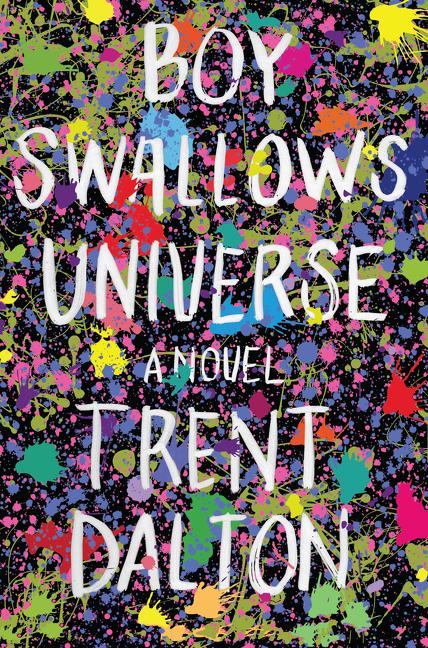 Exiled in a drug-oppressed refugee suburb in 1980s Australia, a twelve-year-old boy dreams of a career in journalism while fending off the local criminal element to protect his imprisoned mother.

What The Reviewers Say
Rave John Collee,
The Sydney Morning Herald
Welcome to the weird and wonderful universe of Trent Dalton, whose first work of fiction is, without exaggeration, the best Australian novel I have read in more than a decade ... His dialogue is every bit as funny and accurate as Winton's, his prose just as evocative, and he's better at wrapping up the ending. The last 100 pages of Boy Swallows Universe propel you like an express train to a conclusion that is profound and complex and unashamedly commercial ... Dalton's novel takes flight in a multitude of unexpected directions ... The story is peppered with wordplay, with crude jokes and gems of literary criticism ... The book is jam-packed with such witty and profound insights into what's wrong and what's right with Australia and the world. It is almost 500 pages long but I read it in two sittings and immediately want to read it again.
Read Full Review >>
Rave Ellen Morton,
The Washington Post
...a sprawling novel about a thoughtful boy’s premature journey into manhood ... As a narrator, Eli is a casual philosopher who takes in the glory and consequence of the smallest quotidian details, and his acute observations are often refracted through his singular lens of farce and surrealism ... His loss of innocence comes in narrative sucker punches, plot turns that evoke stomach-clenching terror and sickening grief ... Boy Swallows Universe hypnotizes you with wonder, and then hammers you with heartbreak.
Read Full Review >>
Positive Melissa Katsoulis,
The Sunday Times
Many coming-of-age novels set in the 1980s are little more than a roll-call of pop songs, retro snack foods and chopper bikes. Not this one. This is a proper literary novel about addiction, poverty, parenting and the power of love ... you might initially wonder whether you’ll be able to take all 500 pages of Dalton’s idiosyncratic prose style; The opening chapters in which he sets out his stall as a writer of serious emotional and stylistic bravura are occasionally hard to digest. He knows it too ... Dalton has created an electric novel out of a troubled childhood. Boy Swallows Universe is the opposite of a misery memoir, it’s a lively, funny affirmation of the human instinct for survival in a hostile environment.
Read Full Review >>
See All Reviews >>
SIMILAR BOOKS
Fiction