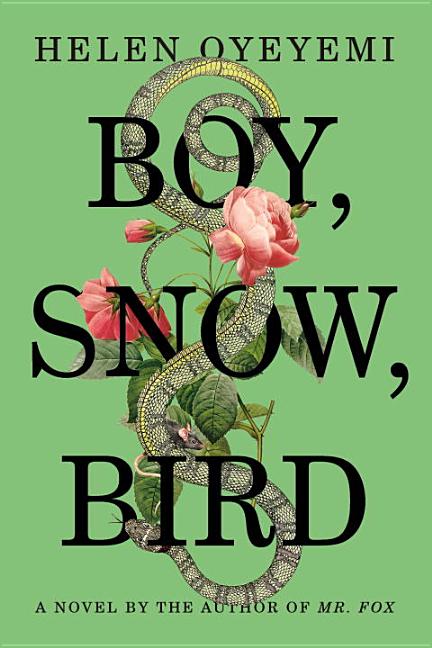 A reimagining of the Snow White story set in the United States during the 1950s and 1960s exploring family secrets, race, beauty, and vanity.

What The Reviewers Say
Rave Ron Charles,
The Washington Post
But I don’t care what the magic mirror says; Oyeyemi is the cleverest in the land ... Oyeyemi aggravates our anxieties about maternal jealousy and the limits of parental love, subjects we’ve been trained from childhood to consider in black and white ... Oyeyemi proves herself a daring and unnerving writer about race. This isn’t one more earnest novel to reward white liberals for their enlightenment... Boy, Snow, Bird wants to draw us into the dark woods of America’s racial consciousness, where fantasies of purity and contamination still lurk. Under Oyeyemi’s spell, the fairy-tale conceit makes a brilliant setting in which to explore the alchemy of racism ... Oyeyemi captures that unresolvable strangeness in the original fairy tales that later editors — from Grimm to Disney — sanded away.
Read Full Review >>
Rave John Freeman,
The Boston Globe
This book pivots so many times around glances and mirrors and reaction shots that a reader will likely feel not tugged but hurled through Alice’s looking glass ... On occasion, Oyeyemi’s restlessness has worked against itself — consuming and deconstructing a story faster than it can be made. Boy, Snow, Bird is the first where that never happens. The splintering of this story creates exactly the kind of prism Oyeyemi seeks to illuminate ... [Oyeyemi's ability to turn the malevolence of a reflecting gaze upon itself, and make it, possibly, amazingly, a positive thing]— more than her narrative special effects — is the extraordinary feat of Boy, Snow, Bird ... With this book [Oyeyemi] proves an even great ability: she can thaw a heart.
Read Full Review >>
Positive Porochista Khakpour,
The New York Times Book Review
... gloriously unsettling ... Oyeyemi’s confidence is palpable — it’s clear that this is the book she’s been waiting for ... The Snow White bits take over, with the Wicked Stepmother and the mirror motifs, and the fairy tale rewrites itself in startling ways ... Still, the greatest joy of reading Oyeyemi will always be style: jagged and capricious at moments, lush and rippled at others, always singular, like the voice-over of a fever dream ... Her sentences occasionally flirt with banality, and when they do, you notice — but this could be an Oyeyemi illusion ... Oyeyemi picks myths and fairy tales because she sees the blood and guts behind the glitter and ball gowns.
Read Full Review >>
See All Reviews >>
SIMILAR BOOKS
Fiction