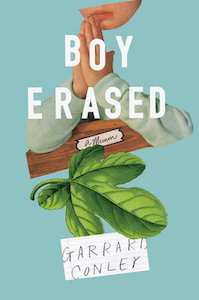 When Garrard Conley was a nineteen-year-old college student, he was outed to his parents, and was forced to make a life-changing decision: either agree to attend a church-supported conversion therapy program that promised to 'cure' him of homosexuality; or risk losing family, friends, and the God he had prayed to every day of his life.

What The Reviewers Say
Rave Steven Tagle,
The Los Angeles Review of Books
...[a] stunning debut memoir ... Boy Erased is a gut-punch of a memoir, but the miracle of this book is the generosity with which Conley writes in an effort to understand the circumstances and motivations that led his family to seek the 'cure' ... Conley writes vividly, with intelligence, wit, and genuine empathy. By embracing complexity and compassion, he reclaims his life and reminds us that a story rarely belongs to one person alone.”
Read Full Review >>
Positive Jamie Brickhouse,
The Washington Post
...a powerful convergence of events that Conley portrays eloquently, if a bit earnestly ... although he paints a convincing picture of why the foundation of his loving parents’ religious faith made his fight against homosexuality vital, he leaves the reader wondering why an erudite and intellectually curious young man didn’t find more cracks in that foundation ... Conley’s close relationship with his mother, who sits vigil with him in a depressing hotel room as he tries to weather the ordeal of LIA, is a tender portrait of that special bond so many gay men and their mothers have.
Read Full Review >>
Positive Meghan Daum,
The New York Times Book Review
Many readers of Boy Erased will be as enraged as Conley. But they will also see the story through the lens of his compassion for those who genuinely thought they were trying to help, particularly his mother, who’s finally the one to say, 'We’re stopping all of this now,' when Conley reaches the breaking point.
Read Full Review >>
See All Reviews >>
What did you think of Boy, Erased?
© LitHub | Privacy