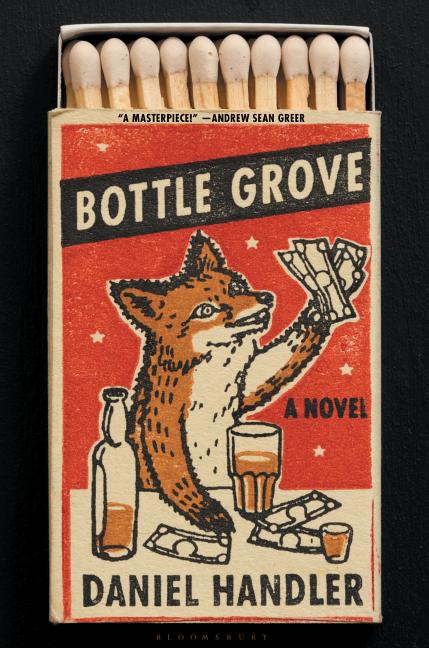 A tale of two couples, two marriages, a bar, and a San Francisco start-up from the best-selling author of A Series of Unfortunate Events.

What The Reviewers Say
Positive Jonathan Fullmer,
Booklist
Handler, adored by younger readers for his Lemony Snicket titles, is a prolific jack-of-all-trades who also pens quirky, postmodern love stories mostly set in present-day San Francisco. His seventh novel for adults reaches deep into those modes for a drunkenly humorous blend of alcohol, entrepreneurial ambitions, and a dash of cheating ... Handler’s clever, highly stylized prose demands alertness in his readers, who may feel tipsy trying to follow the knotted story line. Nonetheless, his quick-witted, timely characters and offbeat but perceptive one-liners make for an intoxicating delight.
Read Full Review >>
Pan Joshua Ferris,
The New York Times Book Review
Nothing is believably conjured to life in Bottle Grove. No spell is cast, no character takes root in the reader’s heart. Captive to Handler’s cleverness, to his allusive play and lack of rigor, the reader tries to make sense of the proceedings, to no avail. Even as Handler stacks elision upon lacuna to paper over his plot holes and sudden narrative swerves, the whole house of cards grows more absurd, irrelevant, cloying and rickety. What’s worse, many developments follow an old sad sexist script. Padgett is a pawn. She is, among a company of literal 'call girls,' pimped out to the titan. That she doesn’t appear to mind is inexplicable. Handler even suggests that this makes her love Martin all the more ... What on earth is a man justly celebrated for the books he writes under the name Lemony Snicket doing playing at rape? I couldn’t determine. One thing is clear: Throughout Bottle Grove, he is not in control of his larks and allusions. He’s simply having fun at his characters’ expense, and at the reader’s, too.
Read Full Review >>
Pan Ian Shapira,
The Washington Post
Who doesn’t enjoy a good sendup of the very people who addicted us to the Internet and all of its devices? Yet Handler seems devoted to making readers put his book down. Scenes and moments feel mashed together and all too often I found myself pausing, rereading pages or paragraphs, confused about how we jumped so instantaneously from one place or person to the next. His narrator, who shapeshifts from omniscient outsider to quasi-first-person raconteur, only made my disorientation worse ... Handler tries to be witty, but fails repeatedly. So many times, Handler writes sentences or pairs of sentences that re-use the same word in an attempt at cleverness ... Handler tries to grapple with some big ideas...But he keeps stymieing momentum, especially with his treatment of sensitive issues ... In the end, I had little hold to on to. The characters were neither sympathetic nor evil enough to make their downfall worthwhile. The plot seemed wafer-thin, and I never felt like the narrator could fully make me believe in the fantasy about a fox’s spirit possessing Reynard.
Read Full Review >>
See All Reviews >>
SIMILAR BOOKS
Coming Soon

The Last Karankawas
Kimberly Garza
Rave
What did you think of Bottle Grove?
© LitHub | Privacy