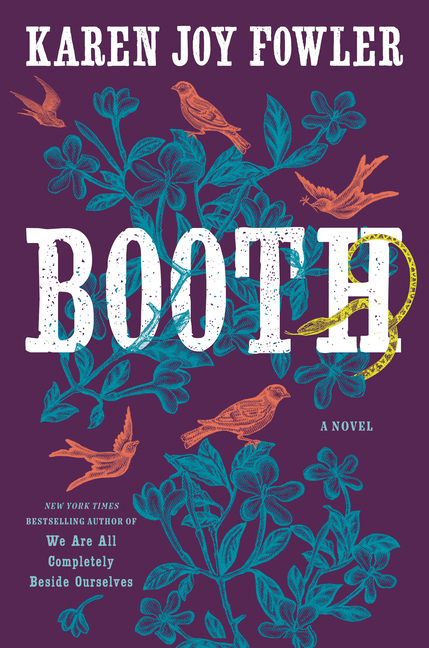 An epic novel about the family behind one of the most infamous figures in American history: John Wilkes Booth.

What The Reviewers Say
Rave Jeffrey Ann Goudie,
The Boston Globe
Riveting ... Fowler has never shirked from a challenge. In this novel, her task is how to contextualize someone whose flaws and fatal misguidedness forever skewed our history ... The climax of the overarching national narrative hangs like a miasma over the novel. We all know the terrible ending. What elevates Booth is the granular texture of what’s beneath the bald facts: the how and the myriad whats and whys, the truths. And there is also Fowler’s trademark dark humor ... If Fowler’s seventh novel occasionally sags from the depth of her prodigious research, Booth is still a massive achievement. In it, Fowler weaves history, family culture, and human cruelties into an insightful reckoning of a past that seems too much a prologue to our American present.
Read Full Review >>
Positive Ellen Akins,
The Star Tribune
An interesting historical novel about a family in 19th-century America, whose story begins in theatrical celebrity and ends in notoriety, broken by the Civil War and the irreconcilable convictions it exposed and the bloody passions they unleashed ... Fowler's portrayal of the theater business, high and low, is fascinating in its particulars ... . But everything that happens, however thoroughly engaging the Booths and the reader, is shot through with our awareness of what's coming, which makes for an odd sort of suspense — a suspense complicated by the sense that this play never really ended, and that we have yet to contend with this darkness at the heart of the American drama.
Read Full Review >>
Rave Diane Cole,
The Washington Post
... exquisite ... Yes, we know even before we turn the first page where the intertwined timelines of the Booths and American history will lead, but Fowler’s deftly imagined family portrait keeps us riveted. Her exploration of the pathways by which a seemingly private family melodrama can bleed into public savagery illuminates not just a single household’s, but an entire country’s toxic dysfunction. That we are still grappling with the Civil War era’s legacy lends Fowler’s chronicle an inescapable contemporary resonance and underlines anew Shakespeare’s timeless observation that what is past is prologue and that we forget it at our peril ... The strategy may seem counterintuitive — would we be reading this book if not for John? — but it works brilliantly. The siblings’ varied ages, temperaments and angles of vision collide and overlap like a kaleidoscope, reflecting ever-changing internal family alliances and recurring quarrels ... Fowler has based her telling of this tale on solid historical research. She also intersperses her narrative with excerpts from Lincoln’s speeches and other historical commentaries on the intensifying conflict between North and South. But there will be no exit from the Booth family drama, or the theater of the Civil War, until we arrive at Washington, D.C.’s Ford’s Theatre on April 14, 1865. The actors have long left the stage, Fowler notes, but the ghosts remain, still haunting us today.
Read Full Review >>
See All Reviews >>
SIMILAR BOOKS
Fiction

Theatre of Marvels
Lianne Dillsworth
Positive
What did you think of Booth?
© LitHub | Privacy