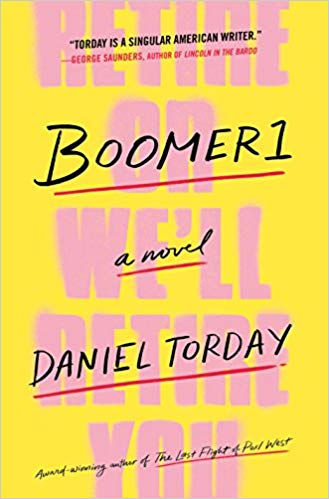 After his academic job search, his journalistic career, and his marriage proposal go down in flames, an angry young man moves into his mother's basement and starts a radical movement that pits millennials against baby boomers.

What The Reviewers Say
Rave Emily Bobrow,
The Wall Street Journal
Mark Brumfeld is angry. At 31 he is jobless, jilted and deep in debt ... There, in the basement bedroom of his youth, he spawns the Boomer Boomers, a revolutionary group of unemployed millennials who accuse baby boomers of selfishly clinging to all the good jobs. 'They were meant to retire at the age of sixty-five,' Mark declares in the first of many homemade videos to go viral. 'And they have not retired. They have not' ... For a book animated by the gripes of young people, it is interesting that the most fully realized character here is Julia. Mark’s mother...Her story highlights some of the fatuousness of making broad generational generalizations, not least because most female boomers have had less agency than their daughters. She also poignantly illustrates the slow but steady creep of time, and the way 'old' age often arrives as a surprise. Mr. Torday has written this book with verve, but it would have been nice if he had slowed down a bit. Mark and Cassie’s relationship feels rushed, and some of their choices seem more convenient than plausible. Still, Boomer1 is a sharp, bright and often amusing snapshot of this unwieldy economic moment.
Read Full Review >>
Positive Olivia Sudjic,
The New York Times Book Review
It’s hard to tell where the book’s sympathies lie—it reads as contemporary satire with Shakespearean echoes—but the baby boomers’ own verdict is 'meshugas.' Torday reveals the artificiality of all identity markers, from given names to generational monikers ... Many of the book’s best passages explore the collapsing of time—decaying leaves become 'a synaptic palimpsest'—and from the old songs [protagonist] Mark and [ex-girlfriend] Cassie cover to the new names they take, the hybridization of past and present permeates the novel, complicating any division between 'us' and 'them.'
Read Full Review >>
Positive Niko Maragos,
The Millions
Arriving almost exactly seven years after the first Occupy Wall Street protests, Boomer1 reimagines that movement as a decentralized, dark-web-conspired wave of 'generational domestic terrorism.' In this case, it’s not the 1 percent against the 99 percent, but baby boomers against millennials, the latter camp having been been radicalized by the video missives of angry, unemployed, and masked YouTuber 'Isaac Abramson,' who is actually not a millennial but identifies as one ... Torday’s book is eerily prescient of the America we’ve struggled to reckon with since Nov. 9, 2016, and all the more unsettling even in spite of its clever humor:...Only two years ago, social media was still vaguely and cheerfully 'democratizing' instead of undermining democracy itself, and 'leaning in' was what people were saying women had to do to be taken seriously. With or without the current situation, that former self-deceptive tech utopianism could have never lasted because nothing does, even for youth who’ve grown up with a sense of mastery over history. That’s the melancholy theme that runs through this book from beginning to end, which Torday focalizes through the sad character of Mark’s mother, Julia. Reflecting on her own childhood in suburban Philadelphia at the dawn of the postwar boom times, she recalls 'the beginning of a period, an era, that appeared then to have no limit.'
Read Full Review >>
See All Reviews >>
SIMILAR BOOKS
Fiction

The Lamplighters
Emma Stonex
Rave
What did you think of Boomer1?
© LitHub | Privacy