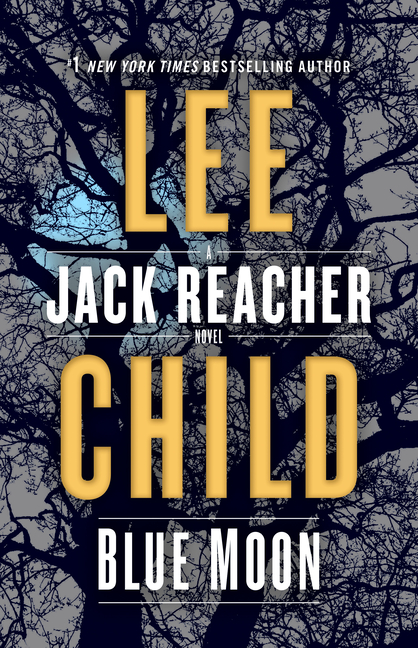 Jack Reacher lends a hand to an elderly couple under threat from loan sharks and winds up in the midst of an underworld war, in the 24th entry in Lee Child's bestselling series.

What The Reviewers Say
Positive Lloyd Sederer,
New York Journal of Books
The fight scenes are amazing when those full of themselves make the mistake of violating Reacher’s basic rule of (non) engagement. Each novel’s tempo grows in pace, driving the story like a drumbeat to its satisfying resolution (and the reader’s relief). The finale of Blue Moon feels like the third stage of a moon rocket, exploding toward its destination. Wernher von Braun would be proud. Then Reacher again is back on the road, as if nothing had happened. He neither needs nor takes any reward. 'Once in a blue moon things turn out just right.' Our internal code of justice, a moral true north, has been served. While that’s never easy, when it happens it feels like a priceless commodity.
Read Full Review >>
Positive Liz French,
Library Journal
Some villains are dispatched too neatly and some allies are found too rapidly, but it doesn’t matter. Reacher’s plans of attack and wry observations are what fans come for and what they get here. Child touches lightly on current issues—corrupt tech entrepreneurs, economic disparity—but keeps the action flowing in this satisfying entry.
Read Full Review >>
Mixed Kirkus
That this is the best premise for a Reacher novel in some time, even if it's partly lifted from Akira Kurosawa's film Yojimbo, can't quite disguise that something has gone off in the series. Reacher's apologies to a suffering old couple that there's not much he can do isn't really what we want in a hero—especially one who has always taken such pleasure in pissing off bullies. Whenever the plot shifts to the machinations between the rival gangsters it bogs down in exposition. And while Reacher's ass-kickings have always been amusing, the series has never developed the dark ability to turn the violence into a deadpan sick joke. The carnage here should be funnier the more extreme it gets. It's not bad, but it's far from the tight, nifty execution that made the Reacher books so much fun to begin with. Perhaps if there were more time between chapters, Child's series could recover the polish it deserves.
Read Full Review >>
See All Reviews >>
SIMILAR BOOKS
Fiction