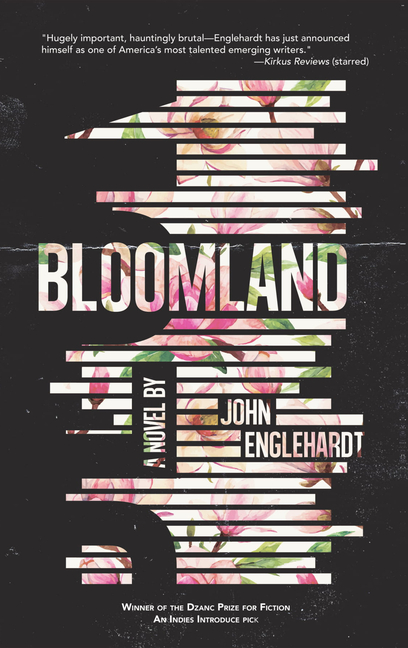 Winner of the Dzanc Books Prize for Fiction, Bloomland opens during finals week at a fictional southern university, when a student walks into the library with his roommate's semi-automatic rifle and opens fire. When he stops shooting, 12 people are dead. As the community wrestles with the fallout, Bloomland interrogates social and cultural dysfunction in a nation where mass violence has become all too familiar.

What The Reviewers Say
Rave Nicholas John-Francis Claro,
Arkint
An apposite novel echoing the current state of America—where mass shootings have become more American than apple pie—John Englehardt’s tremendously affecting debut, Bloomland, explores one such horrific event ... Delivered in revolving accounts in the immediacy intrinsic of the second-person viewpoint by a first-person narrator, who lies always somewhere on the periphery, Bloomland provides the impetus of, and no excuse for, the young-man-turned-domestic-terrorist’s cowardly act of violence ... The pages of Bloomland are graced with empathy and anger; confusion alongside profoundly powerful insight and understanding of the post-traumatic psyche ... Gorgeously written, intrepid by design, and deeply disconcerting in its authenticity, Bloomland is a remarkable achievement and stands out as an incredibly important novel of our time.
Read Full Review >>
Rave Kirkus
Following each character in alternating second-person chapters—a clever and daring structure in which Eli's creative writing instructor operates as the guiding first-person consciousness at the novel's core—Englehardt’s brilliant and insanely brave debut is a culturally diagnostic achievement in the same way that Don DeLillo’s White Noise and Libra are culturally diagnostic achievements; his sentences are brutal and unflinching and yet mystically humane in the spirit of Denis Johnson’s Angels; and his America is at once beautiful and love-swirled and a kaleidoscopic wreck—a land whose cultural geology mirrors its physical one, routinely generating the 'mindless malignancy' of town-wrecking tornadoes and desperate young men with guns. Hugely important, hauntingly brutal—Englehardt has just announced himself as one of America’s most talented emerging writers.
Read Full Review >>
Positive Rich Smith,
The Stranger
In high-quality, almost incantatory literary prose, Englehardt's narrator examines the lives of the killer, the victims, the bereaved, the town, and himself in an attempt to find honest answers to frustratingly routine questions ... the book is not 'about' the shooting so much as it is 'about' the fraught process of using empathy as a tool to discover the motivations of characters and to gain wisdom from events. The move not only cleverly reflects the reader's position, but ultimately embodies in a literary technique the primary concern of the novel, which is, more or less, that any one of us—with the right cocktail of unexamined grief, psychological instability, misogyny, and easy access to guns—could be the shooter. Aside from landing that literary trick, Englehardt finds surprising details in this tragically typical narrative ... There is very little—if any—humor in the book. So the only thing to balance out the solemnity of Englehardt's enterprise is a kind of enduring sweetness, a nervous curiosity, and a keen eye for describing Arkansas in ways that make the place sound kind of nice actually, all of which make the book worth a read.
Read Full Review >>
See All Reviews >>
SIMILAR BOOKS
Fiction

A Door Between Us
Ehsaneh Sadr
Rave
Fiction

Stillicide
Cynan Jones
Positive
What did you think of Bloomland?
© LitHub | Privacy