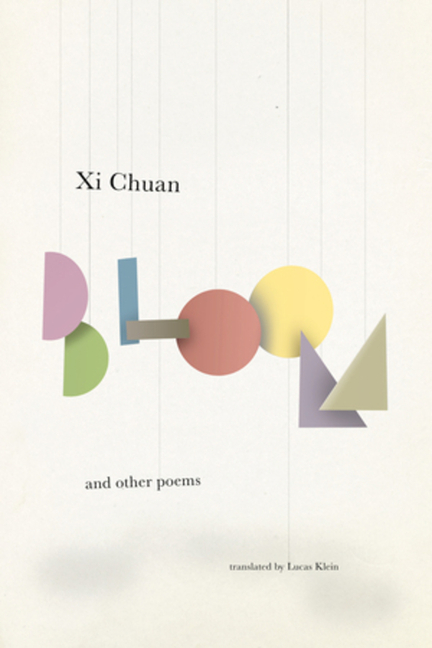 A meditation on the dreams and defeats, disparities and excesses, mythologies and absurdities of contemporary life.

What The Reviewers Say
Rave Heather Green,
Poetry Foundation
The poems in Bloom integrate Chuan’s multifarious literary influences—centuries of Chinese and Western texts—with sharp observations about contemporary life, human nature, and desire...Chuan’s poetry speaks, in Lucas Klein’s translation, in a vital, brash, and, at times, comic voice, paradoxically both cynical and idealistic...The thrill of this collection arises from Chuan’s charismatic voice, vividly rendered by Klein, and the unexpected turns from the intellectual to the sensual, from the absurd to the dead-serious.
Read Full Review >>
Rave Shawn Hoo,
Asymptote Journal
Bloom and Other Poems is a finely curated and translated collection of poems, powerfully exhibiting a poet’s philosophical and poetic stamina...In mining the depths of a single word, conceit, or even of history itself to simultaneous completion and depletion, Xi Chuan rewards those who come out on the other side of each poem with new orientations and disorientations—confluences that perhaps this era has not even begun to understand it needs.
Read Full Review >>
Positive Publisher\'s Weekly
The tender, wry latest from Xi Chuan examines the very nature of complexity: 'Who can provide a decent explanation,' one poem inquires...It is the question at the heart of many of these poems, which poke and prod at the increasing polarization of society, culture, politics, and art, as well as the startling juxtapositions of daily life...In a world where 'even the trash can is golden,' these poems are on the lookout for intrinsic, holistic meaning...'Bloom like a fool,' one advises. Xi Chuan 'fight[s] a death match against the world' that might not find poetry or complexity useful or meaningful, but these pages insist on the value of poetry, and of living a life steeped in the beauty of the world.
Read Full Review >>
See All Reviews >>
What did you think of Bloom & Other Poems?
© LitHub | Privacy