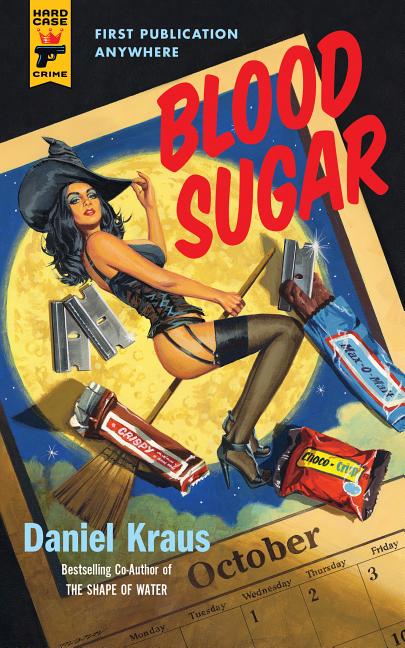 A troubled man plans to unleash his rage on trick-or-treaters with tainted candy, enlisting the help of three neighborhood children to carry out his plan.
Mixed
Based on 3 reviews

What The Reviewers Say
Positive Joe Hartlaub,
Bookreporter
Blood Sugar is not your usual Hard Case Crime book. It is, for one, an original story, newly written and released, as opposed to the rare, out-of-print and/or long-lost novels that this venerable and indispensable imprint typically publishes. For another, it is not a crime novel, as that term is normally used in the literary world ... That said, Blood Sugar makes demands. It is told in a stream-of-consciousness fashion, and the stream is polluted ... It’s extremely gritty, and while there isn’t really any sex or violence, there is some cringe-inducing and unblinking focus on bodily fluids and functions that you won’t want to encounter while drinking or eating. There is, however, plenty of suspense of the will-they-or-won’t-they type, and the character development that Kraus whittles out of the vignettes ultimately elevates the book above the street-level situations it describes in nuanced detail before the reader is aware of it ... whatever difficulties one might have with the breathless narrative...are balanced by the short chapters and frequent chapter breaks. The cover art, courtesy of Paul Mann, features a fetching broom-riding witch and has absolutely nothing to do with the story, other than that both concern Halloween. It works for me.
Read Full Review >>
Mixed Publishers Weekly
...[a] meandering excursion into hoarder noir from Kraus ... Kraus makes an impassioned case for the value of family with his marginalized cast of characters, but the plot is one that could have worked just as effectively in short story form. The novel lives or dies by how a reader reacts to Jody’s point of view. As an entry in the literature of Halloween, this is much more icky than eerie.
Read Full Review >>
Mixed Kirkus
While the grim circumstances of these kids’ lives are truly heartbreaking, there are darkly comic moments and even a glimmer of hope in the finale; but these elements are weighed down by the book’s sheer amount of squalor, made all the more disturbing because the main characters are children. Will Jody stop Robbie? Will readers overcome their roiling stomachs enough to care? Whether you love or hate this nihilistic little oddity, you probably won’t forget it.
Read Full Review >>
See All Reviews >>
SIMILAR BOOKS
Fiction

The Devil Takes You Home
Gabino Iglesias
Positive
What did you think of Blood Sugar?
© LitHub | Privacy