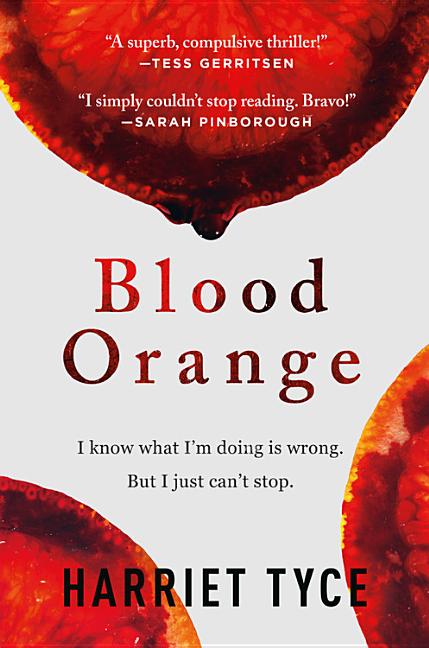 A young lawyer's outwardly perfect life spirals out of control as she takes on her first murder case in this dark and twisty debut thriller for readers of Paula Hawkins, A.J. Finn, or Shari Lapena.

What The Reviewers Say
Rave Michele Leber,
Booklist
This debut novel by a former barrister displays the pacing skills and smooth prose of a seasoned author, as suspense builds to a stunning climax. Keep your eyes on Tyce.
Read Full Review >>
Positive Richard Cytowic,
New York Journal of Books
The characters are nuanced. Clues are well planted. Conflict arises steadily. The action through lines are deftly woven as they churn up a toxic brew of passion, jealousy, betrayal, manipulation, hatred, and love ... Blood Orange is dark and twisted, and will keep readers awake well into the wee hours as the plot hurls toward its surprising conclusion.
Read Full Review >>
Positive Bob Duffy,
Washington Independent Review of Books
... [the book contains a] predictable narrative formula to which this clearly talented writer has yoked herself. After all, she’s got a chart-topper to write, not a literary lodestar. Even so, author Harriet Tyce deserves credit for telling Alison’s story with admirable attention to atmosphere, characterization, and suspense. She vividly depicts the English court system, which may be new in its intricacies for American readers — as well she should, having herself spent nearly a decade as a criminal barrister. Tyce also orchestrates Alison’s Sisyphean exertions to recover with a skillful command of narrative suspense, never teasing us with the temptation to give up on her as misfortune keeps snapping at her heels ... despite the bitter circumstances arrayed against her heroine, Tyce pulls off a gob-smacker of a reversal in Blood Orange’s final moments. It elevates this book from seamy law-office melodrama to respectable thriller.
Read Full Review >>
See All Reviews >>
SIMILAR BOOKS
Coming Soon

On Java Road
Lawrence Osborne
Rave
What did you think of Blood Orange?
© LitHub | Privacy