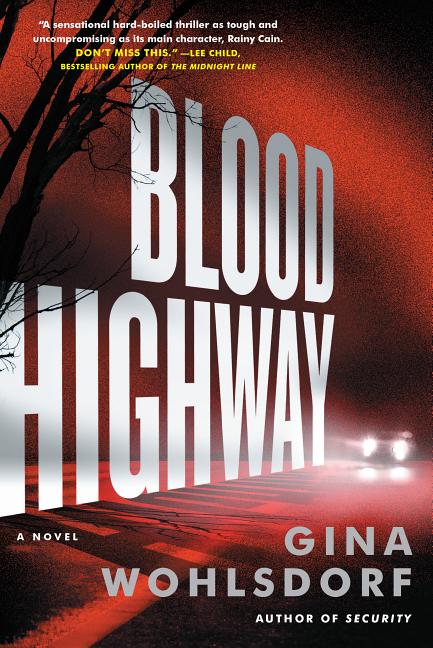 When seventeen-year-old Rainy comes home late one evening and finds her mother dead of a suicide, she has no reason to suspect that her death is directly tied to the fact that her father, the notorious Sam Cain, has escaped from prison and is coming for her because he is convinced that both Rainy and her mother know where the stolen money is hidden.

What The Reviewers Say
Positive Joe Hartlaub,
The Book Reporter
It’s an unsettling book, all the more so for its ability to play upon the reader’s often erroneous expectations and perceptions. Blood Highway, her sophomore effort, is (somewhat) more straightforward but no less surprising than its predecessor for entirely different reasons ... The book as a whole seems at times to be a collaborative effort between Elmore Leonard and Joan Didion, which isn’t as impossible as you might think. Blood Highwaymay be more of a young adult novel than its predecessor, but it is intriguing as well as unsettling for both demographics. Check it out.
Read Full Review >>
Positive Amy Steele,
Entertainment Realm
Author Gina Wohlsdorf spent a decade writing the novel. When she started she wasn’t that much older than her central character, strong-willed and determined feminist Rainy. As I dove into this thriller, which really skirts into horror, I didn’t know what was going on for quite a bit but the compelling writing kept me reading. There’s a cinematic edginess to the characters and this riveting and scary cross-country chase.
Read Full Review >>
Rave Molly Odintz,
CrimeReads
Gina Wohlsdorf’s first thriller, Security, proved her sense of the cinematic and the stylish, and her second looks to cement her reputation as one of the most visual and stylized crime writers around. While both Security and Blood Highway feature scrappy protagonists with comic book names denoting moxy and toughness, Security was a locked room mystery where Wohlsdorf spent the better part of the action playing with contained space, while Blood Highway takes its show on the road.
Read Full Review >>
See All Reviews >>
SIMILAR BOOKS
Fiction

The Devil Takes You Home
Gabino Iglesias
Positive
What did you think of Blood Highway: A Novel?
© LitHub | Privacy