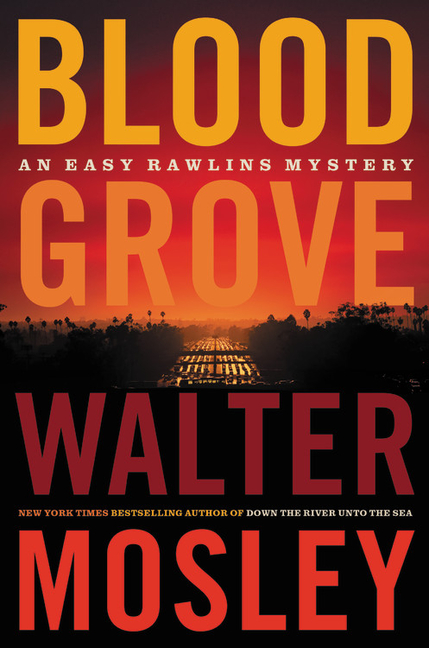 It is 1969, and flames can be seen on the horizon, protest wafts like smoke though the thick air, and Easy Rawlins, the Black private detective whose small agency finally has its own office, gets a visit from a white Vietnam veteran. Easy takes the case when he realizes how damaged the young vet is from his war experiences — the bond between veterans superseding all other considerations.

What The Reviewers Say
Rave AARON COATS,
The Chicago Review of Books
Mosley continues advancing the mystery genre with his novel Blood Grove ... Mosley’s authorial superpower remains his razor-sharp perception. Through Rawlins, who operates from his corner of Los Angeles, Mosley speaks to the nation’s current ills, to the effect that Blood Grove feels more like Rawlins seeing into the future than Mosley writing about the past ... This novel is more than a simple mystery meant for entertainment; it and its serial predecessors advocate for the Black hero in literature and in life ... At a time when cities around the world are speaking out against the unjust treatment of Black and Brown people, particularly by police, Mosley astutely invokes the imagery of segregation during World War II and the some hundred cities burning during the unrest that ensued after King’s assassination. Rawlins survived it all ... The words uttered by Mosley through Rawlins are a reminder that there will always be social justice work to be done and that not many will leave unscathed by the trauma – and he manages to do it without a soapbox ... Despite the painful history lessons he faces along the way, Rawlins’s journey is not without joy. From his witty remarks while staring down the barrel of a gun to being genuinely starstruck when a member of the Rat Pack makes a cameo, to his unapologetic love for his daughter, Blood Grove is not so bleak and burdened to the point of unapproachability. It is a strong entry in a robust series and an even stronger entry into the genre that further solidifies Rawlins as an enduring figure, one who has survived and thrived in a world that sees him as less than the hero he is.
Read Full Review >>
Positive Maureen Corrigan,
The Washington Post
What ensues is the Tilt-a-Whirl of a careening plot, but throughout Blood Grove, Mosley also summons up images of places that linger ... The central mystery in Blood Grove, — as in all the Easy Rawlins books — is as much about the brazen contradictions of American society as it is about what happened in that orange grove one night. But that mystery turns out to be pretty gripping too.
Read Full Review >>
Positive Oline H. Cogdill,
South Florida Sun Sentinel
Walter Mosley easily glides back to his Easy Rawlins series in this strong 15th outing ... Mosley makes 1969 a character itself, showing how the times definitely were a-changing during that volatile year ... A solid mystery, Blood Grove will show long-time readers just how much they have missed Easy.
Read Full Review >>
See All Reviews >>
SIMILAR BOOKS
Fiction

Find You First
Linwood Barclay
Positive
What did you think of Blood Grove?
© LitHub | Privacy