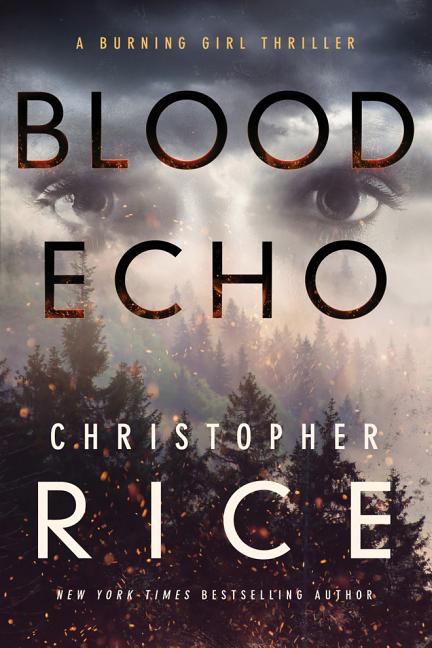 A conspiracy that promises bloodshed and the only woman who can stop it collide in the second thrilling installment of the Burning Girl series.

What The Reviewers Say
Rave Ray Palen,
Book Reporter
A hardcore thriller that pulls out all the stops and features one of the genre’s most unique protagonists. Imagine, if you will, the little girl from Stephen King's Firestarter as a fully realized adult with endless powers, and you only will be scratching the surface of what Charlotte Rowe is all about ... Christopher Rice has aimed to emerge from the shadow of being Anne Rice’s son and stand alone as an established author. I believe he has fulfilled that goal with this series, which has given him a character and a subject matter that clearly stand apart from all the other work he has done. Blood Echo is a fireball of a novel (pun intended) that is difficult to put down ... a sleekly written thriller, and Charlotte Rowe is a complicated but likable heroine who readers will fall for instantly.
Read Full Review >>
Positive Toni V. Sweeney,
New York Journal of Books
Christopher Rice has written a suspense-filled, forceful second entry in his series, a well-balanced thriller with deep-delving characterizations. Blood Echo is filled with a complex cast of characters imbued with both good and evil, as well a good man who walks the thin line between.
Read Full Review >>
Mixed Kirkus
Readers may roll their eyes at the tired scenario of Charley posing as a prostitute in order to get taken by a killer (who, of course, skins his female victims), and, adding insult to injury, she gets set on fire at the culmination of the mission. Don’t worry, though, because Zypraxon ensures full healing. Yep, Charley is a bona fide superhero, but readers hoping for more missions that see Charley taking down serial killers may be disappointed, because Luke and Charley uncover a possible terrorist plot that threatens the town, and for Charley, the danger hits very close to home ... Rice has something to say about the devastating effects of childhood trauma and what makes a monster, but much of it gets lost in an overstuffed narrative that relies heavily on expository dialogue and over-the-top action scenes built for maximum shock value ... The Burning Girl is losing her spark.
Read Full Review >>
See All Reviews >>
SIMILAR BOOKS
Fiction

The Devil Takes You Home
Gabino Iglesias
Positive
What did you think of Blood Echo?
© LitHub | Privacy