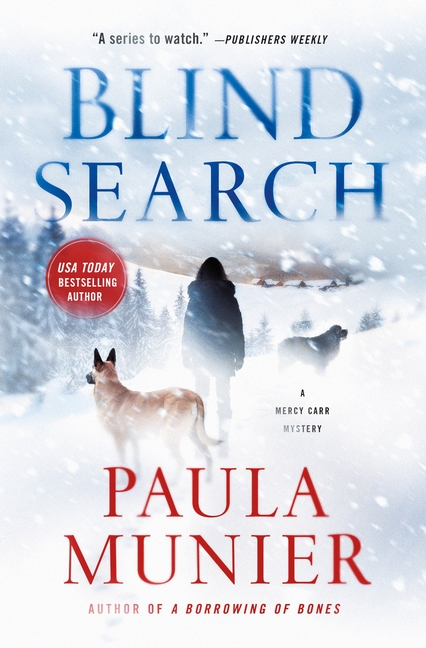 Inspired by the true search-and-rescue case of an autistic boy who got lost in the Vermont wilderness, Munier's mystery is a ride through the worst of winter--and human nature.

What The Reviewers Say
Rave Connie Fletcher,
Booklist
There’s so much to praise here: Munier’s deep knowledge of the culture of hunting (especially the bow-and-arrow variety); her brisk, incisive characterizations; the way she maintains a taut line of suspense throughout; and, best of all, her portrayals of wounded yet still courageous pairs of humans and dogs. A not-to-be-missed K-9 mystery.
Read Full Review >>
Positive John Valeri,
Criminal Element
Munier does an admirable job of portraying such a plight with sensitivity; indeed, she showcases Henry’s extraordinary abilities (mathematical prowess and photographic recall among them) rather than focusing solely on the things that make him vulnerable, though the latter certainly enhance the story’s overall sense of urgency. The ongoing flirtation between Mercy and Troy, and the ill-timed reemergence of Troy’s estranged wife, add an element of romantic suspense that further complicates their halting relationship. And then there’s the picturesque New England setting, as seductive as it is savage, its seeming splendor belying the harsh realities of hunting season ... on target with the promise set forth with A Borrowing of Bones. While the story should stand alone adequately for new readers, the progression of characters (both human and canine) and circumstance will appeal to loyalists who’ve been anxiously awaiting a follow-up. Bottom line: If Paula Munier isn’t yet on your 'must-read' list, she should be.
Read Full Review >>
Positive Julie Kane,
Library Journal
Charming working dogs are the icing on the cake in this story, Vermont is as tough a character as Mercy, and Munier writes them with both intricacy and ease ... Returning readers will celebrate this sequel; those new to Mercy and Elvis will be delighted to catch a solid series in its early days. All will look forward to more.
Read Full Review >>
See All Reviews >>
SIMILAR BOOKS
Fiction

The Preserve
Ariel S Winter
Positive
What did you think of Blind Search: A Mercy Carr Mystery?
© LitHub | Privacy