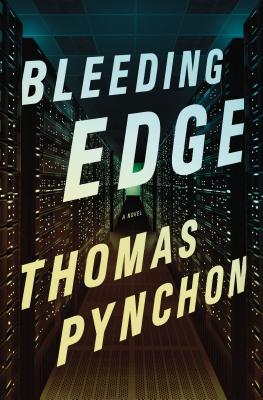 In the lull between the collapse of the dot-com boom and the terrible events of September 11th, fraud investigator Maxine Tarnow starts looking into the finances of a computer-security firm and its billionaire geek CEO, whereupon things begin rapidly to jam onto the subway and head downtown.

What The Reviewers Say
Rave Ed Park,
Bookforum
Present in every scene, Maxine is a single mom and a quasi PI—in Pynchon’s words, a ‘Certified Fraud Examiner gone rogue.’ A case involving certain shadowy transactions leads her into Matrix territory, first to a virtual world known as DeepArcher, a sort of Second Life avant la lettre, then to the Deep Web, the ‘endless junkyard’ of the Internet, beyond the reach of search engines, and toward a ‘horizon between coded and codeless,’ where even the dead might live again. But it’s the living, breathing details of Upper West Side life, circa 2001, that give Bleeding Edge its humor and its heart … After the towers fall, and after immersion in DeepArcher, even the real world feels less real. Pynchon slips a note of unease into his droll description of that first post-9/11 Halloween, when ‘not even people who said, ‘Oh, I’m just going as myself’ were authentic replicas of themselves.’
Read Full Review >>
Positive Michael Chabon,
The New York Review of Books
It’s tempting to suppose that Bleeding Edge has been written, in part, as a response to the Pynchonization of consensus reality, a transformation that became irrefutable with the rise of the World Wide Web, with its name like that of a global crime syndicate out of some half-parodic James Coburn spy caper and its infinite interlinks a perfect metaphor for paranoia itself. Having nuzzled up to the subject briefly in Inherent Vice, Pynchon digs deep, here, into the history of the WWW (V. sextupled?), from the DARPAnet Cretaceous of 1969 to the dot-com bust at the turn of the millennium … A good postmodernist, like a 9/11 truther, can afford the luxury of disdain for innocence; a parent is bound to protect it. Bleeding Edge is best understood not as the account of a master of ironized paranoia coming to grips with the cultural paradigm he helped to define but as something much braver and riskier: an attempt to acknowledge, even at the risk of a melodramatic organ chord, that paradigm’s most painful limitation.
Read Full Review >>
Positive Jonathan Lethem,
The New York Times Sunday Book Review
Are you ready for Thomas (Screaming Comes Across the Sky) Pynchon on the subject of Sept. 11, 2001? On the one hand, his poetry of paranoia and his grasp of history’s surrealist passages make a perfect fit. Yet his slippery insouciance, his relentless japery, risk being tonally at odds with the subject … Bleeding Edge unnervingly plays footsie with 9/11 trutherism, but I think the discomfort this arouses is intentional. Like DeLillo in Libra, Pynchon is interested in the mystery of wide and abiding complicity, not some abruptly punctured innocence … In Pynchon’s view, modernity’s systems of liberation and enlightenment — railway and post, the Internet, etc. — perpetually collapse into capitalism’s Black Iron Prison of enclosure, monopoly and surveillance. The rolling frontier (or bleeding edge) of this collapse is where we persistently and helplessly live.
Read Full Review >>
See All Reviews >>
SIMILAR BOOKS
Coming Soon

Night of the Mannequins
Stephen Graham Jones
Rave
What did you think of Bleeding Edge?
© LitHub | Privacy