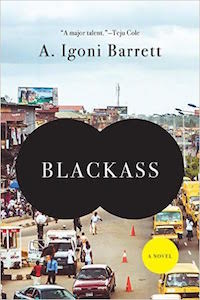 A satire in which Furo Wariboko, a young Nigerian, awakes the morning before a job interview to find that he's been transformed completely into a white man, except for one particular body part.
Positive
Based on 9 reviews

What The Reviewers Say
Positive Hawa Allan,
The Barnes & Noble Review
There are ongoing and valid debates on 'whom novels are written for' and the editorial pressures on non-white and non-Western authors to 'explain' rather than tell their stories. While Blackass certainly displays the effect of such realities, Barrett craftily transforms these systemic pressures into art. Yes, he 'explains' what pidgin is, but he also describes it as 'the shortest distance between two thoughts' that caused 'mingled voices to beat the air like wings of released doves.'
Read Full Review >>
Positive The New Yorker: Briefly Noted
The triumph of the book is its passionate and scrupulously detailed picture of Lagos—the roadside bukas that serve hot stew on steel plates, the arduous choreography of the traffic, and the glittering shopping malls to which Furo/Frank gravitates, because all races mix there in a neutral atmosphere of globalized wealth.
Read Full Review >>
Pan Michael Schaub,
NPR
...Blackass, though very good in parts, doesn't really work as a novel. Barrett definitely has great ideas and original observations, but it seems like he's tried too hard to force them all into one book. The result is a novel that's not unenjoyable, but one that never really comes together.
Read Full Review >>
See All Reviews >>
SIMILAR BOOKS
Fiction

Milk Fed
Melissa Broder
Rave
What did you think of Blackass?
© LitHub | Privacy