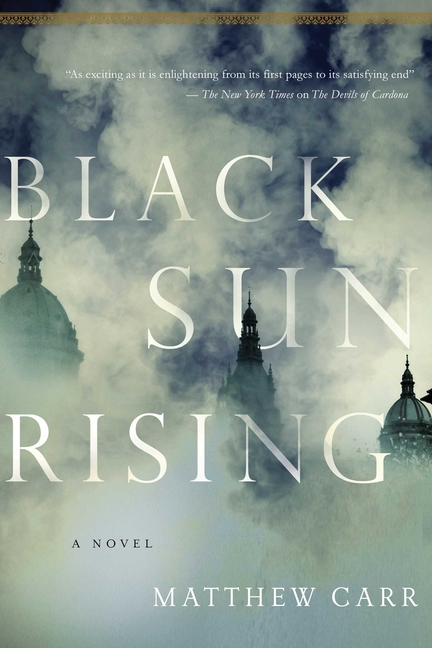 In 1909 Barcelona, a seemingly straightforward investigation into marital infidelity turns into something far more sinister, with private detective Harry Lawton unraveling the relationship between a woman's dead husband and corruption, political conflict, and crazed racial pseudo-science where no one's survival is guaranteed.

What The Reviewers Say
Rave Tom Nolan,
The Wall Street Journal
At times Black Sun Rising displays the action of a vintage Richard Harding Davis adventure. Other passages exude the spookiness of an Edgar Allan Poe tale. The novel is thick with intrigue and incident, balanced by flashes of lyricism ... Mr. Carr well depicts an aging city at the outset of the 20th century—with the surrealistic architecture of Antoni Gaudí (himself a minor character in the novel), illuminated by glowing new electric lights. Most impressive perhaps is its flawed yet persistent hero: hobbled by fits of epilepsy but so devoted to his work and his new friends that 'he would not leave Barcelona until justice was done.'
Read Full Review >>
Rave Doreen Sheridan,
Criminal Element
Matthew Carr has written another historical thriller that is as action-packed as it is thought-provoking...deftly weaving a fictional murder mystery involving eugenics and the British into the factual proceedings. Perhaps more saliently to the discerning reader, it underscores the lessons of an important chapter of Iberian history for global readers in the present day, all while telling a ripping good yarn ... the death quotient is fairly high, though at least this time I was prepared to have the characters I was rooting for meet their untimely ends. I was actually astonished that more of the characters I had grown attached to survived than otherwise ... Lawton’s fate is also satisfying, fitting for a complex hero whose unique background makes him the perfect lens through which to view the tumultuous, sometimes chilling, always thought-provoking proceedings.
Read Full Review >>
Rave Michele Leber,
Booklist
With the help of a crime reporter and a French secret-service agent, Lawton uncovers a stunning plot with profound implications ... Carr combines fiction with fact (including historical characters). The result is a vivid portrayal of Barcelona’s 'Tragic Week' of political and social conflict, a skillfully crafted account that is ultimately as much history as mystery.
Read Full Review >>
See All Reviews >>
SIMILAR BOOKS
Fiction

The Killing Look
J.D. Rhoades
Rave
What did you think of Black Sun Rising?
© LitHub | Privacy