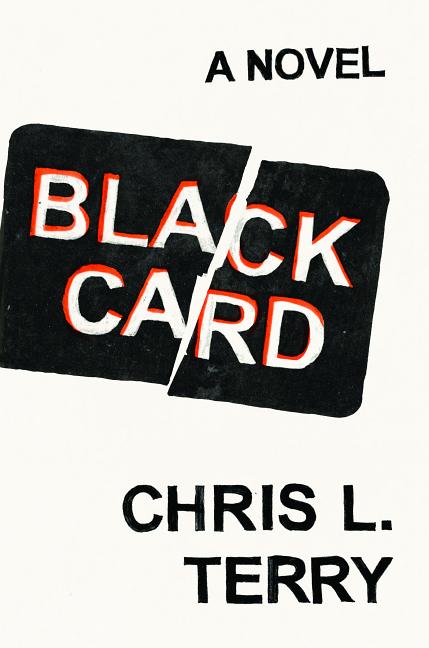 Black Card is the satirical story of a mixed-race punk rock musician who, determined to win back his coveted Black Card, is suspected of a violent crime in early 2000s Richmond, Virginia, and is confronted with the alienation and everyday aggressions experienced in an absurd world divided by race.

What The Reviewers Say
Rave Jason Heller,
NPR
... [a] hilariously searing novel ... In Terry's satirical world, a black card is an actual object — made of gold and diamonds — to be handed out and carried around, one that denotes that rights and expectations of being a black person in America. But the narrator yearns to retain his other self as well, that of a bassist in a punk band who is often able to pass for white. An identity crisis ensues, and Terry wrings every possible ounce of pathos, triumph, and humor out of it ... Ultimately it's the narrator's war with himself that's the most dramatic conflict in Black Card ... As Terry so cleverly and poignantly points out, the narrator's split personality embodies the soul of America itself. And with deadpan comic timing, sensitive insight, and taut, terse prose, Terry plunges the reader into his turmoil. Like nature, racial identity in America abhors a vacuum. If you don't fill in your own identity, as Black Card illustrates, someone else will. Striking a superb balance between levity and heaviness, Terry crafts an enormously fun read about a decidedly less than fun topic.
Read Full Review >>
Rave A.M Larks,
ZYZZYVA
...satirical and funny ... The novel itself—like its opening line—walks a tightrope of humor and introspection ... This literal quest allows Terry’s novel to explore the concept of identity, those we choose (like writer or Cross-Fit enthusiast) and those thrust upon us (like those associated with the color of one’s skin) ... Black Card’s critical look at racial identity in America sees the cracks in everything and calls out everyone, the narrator included. It’s a brilliant comedy that speaks to what America is right now.
Read Full Review >>
Positive Jim Ruland,
The San Diego CityBeat
Black Card poses the question: What does one do when we’re caught between two cultures? ... Terry’s wry sense of humor and caustic wit is reminiscent of Joe Meno’s Hairstyles of the Damned and Todd Taylor’s Shirley Wins. Black Card is a powerful reflection on race and identity that packs a punk rock punch.
Read Full Review >>
See All Reviews >>
SIMILAR BOOKS
Coming Soon