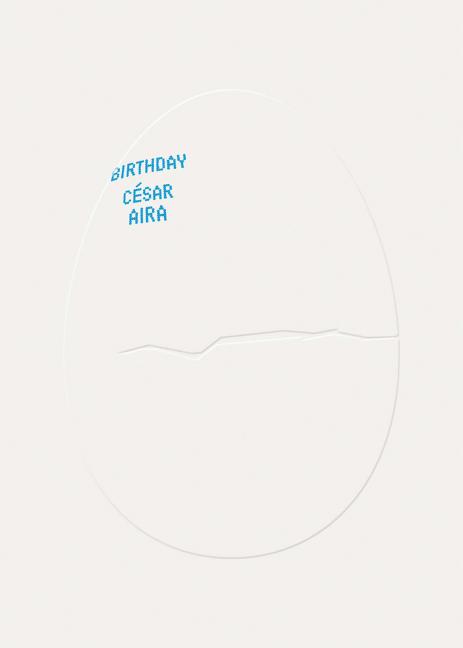 In this first English translation of an auto-fictional memoir by Argentina's most prolific and respected authors, a writer resembling Aira contemplates his career and life's achievements and failures.
Positive
Based on 5 reviews

What The Reviewers Say
Positive Kamil Ahsan,
Los Angeles Review of Books
A beautiful memoir inspired by Aira’s 50th birthday, Birthday is worthy of serious philosophical attention: lengthy digressions tell one explicitly how Aira perceives the past, the present, and the future, but what clarifies all his work is how he how he wrangles strangeness out of the quotidian.
Read Full Review >>
Positive Craig Hubert,
Hyperallergic
...Aira’s books are ... idiosyncratic...feverishly pleasurable and smirkingly funny. His stories begin with a simple premise and stretch to wild extremes ... Birthday settles itself somewhere more firmly as a memoir. Or so it seems, because it’s hard to tell with Aira. He has a tendency to string a reader along in one direction and then turn them around quickly, mixing details from his life into his fiction and vice versa. What you think you’re reading is often something else, and the difference is beside the point ... Aira hits a...melancholic note at the end of Birthday. After twisting and turning around the meaning behind his own writing, he realizes that the thing itself will never go away, both a blessing and a curse.
Read Full Review >>
Mixed Bailey Trela,
The Open Letters Review
... a strange sort of author’s manifesto, and an apologia for Aira’s own discursiveness ... The ironic underpinning of the work, of course, is that Aira’s yen for distraction is part of the generative force behind his writings, and one of the main reasons for his fame ... As with many of Aira’s novelettes, there’s something dry, almost aseptic ... Aira’s lack of a larger schema under which his atomism of speculations would fall into order ultimately makes Birthday an unsatisfying venture.
Read Full Review >>
See All Reviews >>
SIMILAR BOOKS
Fiction

My Struggle: Book 1
Karl Ove Knausgaard
Positive
What did you think of Birthday?
© LitHub | Privacy