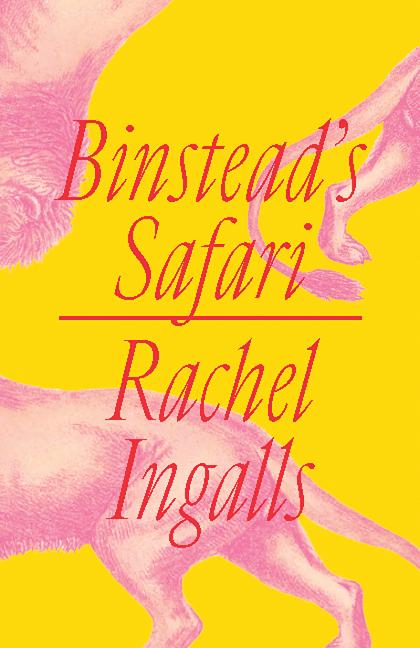 After getting a haircut in London and a few new outfits, Millie, the neglected American wife of an academic pill, is transformed—and, upon arrival in Africa, falls into the perfect affair. Binstead’s Safari unfolds the fractured fairy tale of the rebirth of a drab, insecure woman as a fiercely alive, fearless beauty.

What The Reviewers Say
Rave Elaine Kendall,
Los Angeles Times
Ingalls' spare and elegant novel owes practically nothing to its predecessors ... The tone of the novel deepens into a psychological study of these two people and the subtle and complex ways in which the exotic environment works upon each of them ... Even as the mood darkens, Ingalls' style maintains the wry grace of a sophisticated romance, a control guaranteeing that the denouement will not only be inevitable but astonishing.
Read Full Review >>
Rave Anita Felicelli,
On the Seawall
Rachel Ingalls is an elegant master ... Binstead’s Safari is not about lions or their position as kings. Rather, it employs its fantastic lion imagery to reveal the wild darkness of humans, to uncover the horrifying ways in which humans turn on each other ... While Stan’s observations are handed to the reader almost too easily, how these thoughts work alongside the plot necessitates a reader’s serious attention, and that’s where Ingalls’s artistry lies ... Her characters’ interior thoughts are reinforced by memorable events ... Binstead’s Safari is a strange masterpiece in which the suspenseful and potentially horrifying are balanced by campy comedy ... Yet for all its puzzle-ness, the novella resists encapsulation, resists being named and pinned down. As a particularly intricate and rich cipher, the novella is better experienced than described.
Read Full Review >>
Rave Laurie Hertzel,
The Star Tribune
...Binstead’s Safari explores themes of loneliness, marriage, passion and impossible love. Impossible, but told in such a matter-of-fact way that the reader is entirely swept along ... Binstead’s Safari is a page-turner, a romance, a comedy, a tragedy, a domestic novel and a fish-out-of-water tale, with a bit of magical realism thrown in. It’s amazing and original, and it’s great to see it back in print.
Read Full Review >>
See All Reviews >>
SIMILAR BOOKS
Fiction

The Lamplighters
Emma Stonex
Rave
What did you think of Binstead's Safari?
© LitHub | Privacy