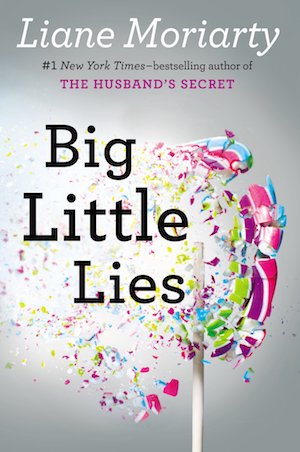 In a story of three women at a crossroads in their lives, Big Little Lies takes on ex-husbands and second wives, mothers and daughters, schoolyard scandal, and the dangerous little lies we tell ourselves just to survive.

What The Reviewers Say
Positive Janet Maslin,
The New York Times
Ms. Moriarty keeps her books long and gossipy, primarily by stalling. She introduces several sets of major characters, cuts back and forth among them, and scatters the narrative with foreshadowing about the terrible, terrible night … Ms. Moriarty writes all this in an easy, girlfriendly style that only occasionally lands with a thud…a low-level bitchiness thrums throughout the narrative, becoming one of its indispensable pleasures. The witnesses’ descriptions of whatever happened are usually comically distorted, as in a game of telephone, so that everyone’s understanding of Trivia Night is at best half-wrong … The ferocity that Ms. Moriarty brings to scenes of masculine sadism really is shocking. A seemingly fluffy book suddenly touches base with vicious reality.
Read Full Review >>
Rave Carol Memmott,
The Washington Post
The family problems Moriarty unwraps are familiar even as we shake our heads, convinced that the terrible goings-on — domestic violence and bullying — could never happen to us … Anyone with children knows that sending your son or daughter to school feels a lot like going back yourself. It’s true for the parents of Pirriwee, whose lives run parallel and then collide under the destructive power of their deceit. They won’t be able to hide behind the facades of Elvis and Audrey on that deadly night at the Pirriwee school … Big Little Lies tolls a warning bell about the big little lies we tell in order to survive. It takes a powerful stand against domestic violence even as it makes us laugh at the adults whose silly costume party seems more reminiscent of a middle-school dance.
Read Full Review >>
Positive Roberta Bernstein,
USA Today
Big Little Lies...has hefty issues on its mind, among them bullying (including the adult kind), spousal abuse and consensual sex that feels a lot like rape. It's even more concerned with the smaller, noxious events of modern life, like the indignities of an ex-husband marrying someone both younger and into yoga, and the off-putting cliques helicopter moms can form … It's a fun, engaging and sometimes disturbing read, even if the characters are more conceits than flesh and blood — Jane, for instance, is a plain duckling a haircut away from being a swan. But Moriarty rounds them out enough — gives them enough pain, edge and funny lines — to be good company, and pages keep flipping as you wait to see which character will die.
Read Full Review >>
See All Reviews >>
SIMILAR BOOKS
Coming Soon