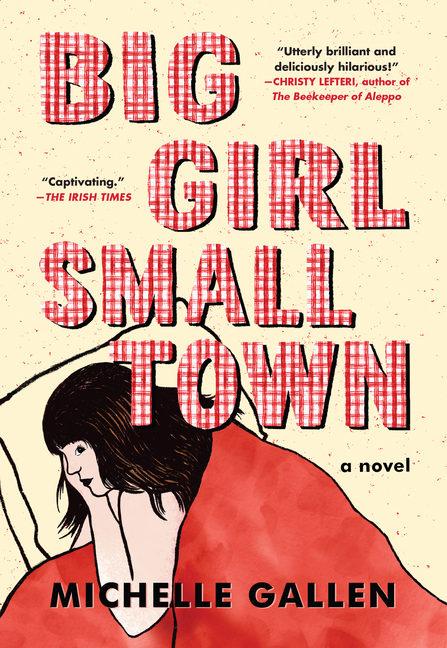 Meet Majella O’Neill, a heroine like no other, in this Irish debut that has been called Milkman meets Derry Girls.

What The Reviewers Say
Rave Rhiannon Lucy Cosslett,
The Guardian (UK)
... offers a young female perspective on a life overshadowed by violence, laced with black humour amid the ruins ... Milkman, from which Big Girl, Small Town’s epigraph is taken, was extremely funny, something many critics failed to convey in all those column inches bemoaning its apparent difficulty, and so is this novel. Written far more conventionally but similarly immersive, it has been set up to have broad commercial appeal ... It’s hard to write a funny novel, and as a reader even harder to find one, so to say that this book made me laugh out loud several times is no small thing ... Pain and trauma lie beneath the jokes ... I felt as though I knew Majella intimately by the end. We are told in the blurb that she is autistic, but the only hints in the text are a certain matter of factness and her occasional habit of rocking and flicking her fingers to calm herself down. Majella simply is a young woman with a sex drive and a sense of humour, so much more than a caricature of her disability, and this feels revolutionary. Big Girl, Small Town is a darkly hilarious novel about small-town life, which manages to be wildly entertaining despite being mostly set in a chip shop – a fine place in which to loiter with such a filthy, funny, clever companion.
Read Full Review >>
Rave Sarah Gilmartin,
The Irish Times (IRE)
... a captivating anti-picaresque, featuring as it does a young woman afraid of going anywhere ... there is a jaunty feel to her portrayal of small-town Ireland similar in style to Ithaca by Alan McMonagle, Upperdown by David Brennan and even the multilayered murder mysteries of Jess Kidd ... This no-nonsense attitude from our narrator is easy to get on board with in a town where so many people are out to harm. The locals with their memorable names – Jimmy Nine Pints, Hairy Feely – see Majella not as a human being but as someone to exploit. Gallen manages to give her protagonist agency despite this ... Chief among these needs is sex, and Gallen writes with searing detail on everything from periods to body odour to masturbation. Majella’s attitude to casual sex is, for a woman of her era, entirely refreshing ... Not everything in the book flows as seamlessly. The phonetic dialogue can grate, the pacing is off – at a major turning point we’re learning about how Majella got her name, for example – and the inheritance subplot is underdeveloped. Questions remain also about the missing members of Majella’s family, though that is arguably a deliberate marker of the landscape rather than a plot misstep ... Gallen’s prose is not literary in nature – but the subject of how impossible it can be for the individual to escape a hopeless environment makes for a compelling story irrespective of style. Big Girl, Small Town is a confident debut with a very memorable protagonist in Majella, a woman who is desperate to lead an untroubled life.
Read Full Review >>
Rave Anna Mundow,
The Wall Street Journal
... in Big Girl, Small Town, an inventively foulmouthed gem of a novel, Michelle Gallen too defies gravity by portraying Majella’s insular community and her trammeled existence with such deadpan wit that sentimentality doesn’t stand a chance ... the novel fairly sizzles with such comebacks, perfectly mimicking the region’s profanity-rich patois (one that may indeed bewilder some readers and scandalize others) ... But Majella, our clear-eyed protagonist, is far more than a gifted wisecracker and Big Girl, Small Town a more shrewd depiction of provincial life than its flippant tone might suggest ... Neither crime nor killer, however, can dominate a novel that is, above all, an intimate portrait of a peculiar—and peculiarly resilient—woman who is fated to notice everything and forget nothing. With her specifically heightened awareness, Majella is a welcome addition to the diverse family of protagonists that includes young Christopher Boone in Mark Haddon’s The Curious Incident of the Dog in the Night-Time, Hesketh Lock in Liz Jensen’s The Uninvited and Keiko in Sayaka Murata’s Convenience Store Woman, all of whom perceive reality through a similar lens ... unfolds in a series of alternating scenes, each one of which, along with some memorable detours, adds another layer to the subtly textured world that Ms. Gallen creates ... The novel’s repetitive rhythm, mirroring that of Majella’s life, is both soothing and stultifying ... The novel’s rudimentary plot is somewhat cursorily resolved, but that’s all right because it was never really the point. Ms. Gallen’s chief strength is her ear for dialogue, not her dramatic timing. Characters are revealed in their own words or in Majella’s laconic observations, but the resulting narrative, for all its eccentricity, never strays into farce or melodrama ... in this oddly affecting novel of everyday defeats, her triumph is more thrilling than any army’s victory.
Read Full Review >>
See All Reviews >>
SIMILAR BOOKS
Fiction

Metropolis
B. A. Shapiro
Mixed
What did you think of Big Girl, Small Town?
© LitHub | Privacy