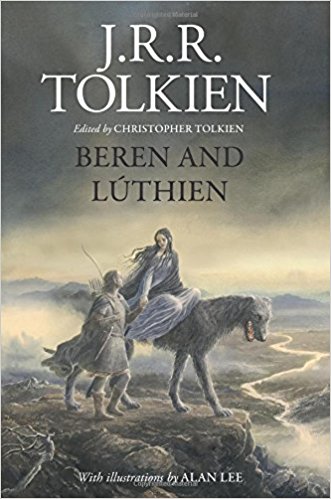 Three versions of a foundation tale in J.R.R. Tolkien's Middle Earth universe (and a key part of The Silmarillion). The story of the human Beren and the elf Lúthien, and their star-crossed romance, which was itself inspired by Tolkien's relationship with his wife.

What The Reviewers Say
Rave Liza Graham,
NPR
Every version of the story in the book is incomplete, but under Christopher Tolkien's steady editorial hand, the fragments assemble themselves to give us an impression of the whole. What makes this possible is the grace with which he handles his long-accustomed dual role of guide to both story and history. His preface and annotations are openhearted and engaging. He leads the reader pleasantly through the greater landscape of Middle Earth in the First Age, and strikes as clear a path as possible through the wilderness of Tolkien's lifelong attempts to get the story finished and published. With eloquence and diligence and care, the son reconstructs and retraces the father's journey, pursuing the tale through draft after draft as Tolkien pursued his vision of Middle-Earth; as Beren, lost and hunted, followed the sound of Lùthien's voice as she sang in the shadowed forest of Doriath.
Read Full Review >>
Positive Josephine Livingstone,
The New Republic
The Tale of Beren and Lúthien is more like a scholarly volume than a storybook. There are versions of the tale in verse, and versions in prose. There are versions where the villain is an enormous, evil cat, and versions where the villain is a wolf. Names change frequently. But instead of taking the 'best text' route, where the editor chooses a single manuscript to bear witness to the lost story, Christopher Tolkien has offered up what remains and allowed the reader to choose. It’s a generous editorial act, and a fitting tribute in memoriam to his parents’ romance.
Read Full Review >>
Positive Christian Holub,
Entertainment Weekly
Within the pages of The Silmarillion, Beren and Lúthien’s story adds some laser focus to a book that can otherwise get rather rambling. But with this book, Christopher proves it can also stand on its own — and in many different forms! ... imbued with a real sense of love, as well as a deep knowledge of loss (Lúthien must ultimately decide between immortality, and most characters don’t make it out of the story in one piece). Tolkien wrote eloquently but also elementally, and it’s fascinating to watch the story’s primal energies channeled across different versions. Beren and Lúthien therefore makes a good introduction to LOTR fans nervous about taking on The Silmarillion, and also gives longtime fans a fascinating look at the Tolkiens’ myth-making process.
Read Full Review >>
See All Reviews >>
SIMILAR BOOKS
Fantasy

40
Alan Heathcock
Positive
What did you think of Beren and Lúthien?
© LitHub | Privacy