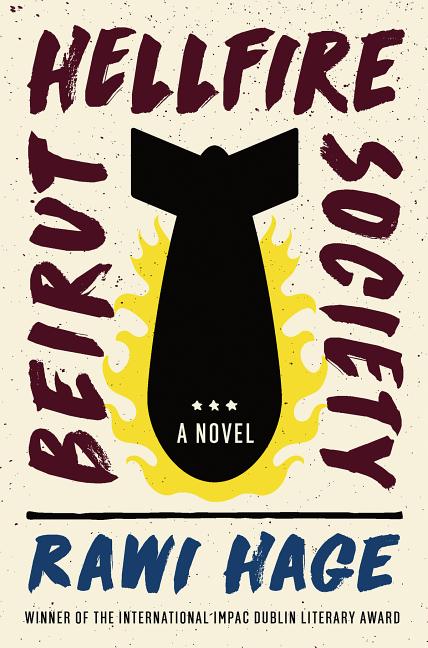 When his father meets a sudden death, Pavlov is approached by a member of the mysterious Hellfire Society―an anti-religious sect that arranges secret burial for outcasts who have been denied last rites because of their religion or sexuality. Pavlov agrees to take on his father’s work for the society, and over the course of the novel he becomes a survivor-chronicler of his embattled and fading community at the heart of Lebanon’s civil war.

What The Reviewers Say
Positive John Williams,
The New York Times
...'grim' is, somehow, the last word one might use to describe this book. Set in 1978, in the early years of the Lebanese Civil War, it draws on Hage’s antic, many-voiced gifts to make a chronicle of war and unrelenting death into a provocative entertainment ... It might be more accurate to call this author irreverent rather than funny, but the qualities obviously overlap ... Hage doesn’t shy from descriptions like that of bombs turning humans into 'butcher’s meat — chuck steak, rib, lower sirloin, flank, shoulder.' There is more than a dash of magic in his approach as well ... His style is loose and extravagant enough — a bit looser here than in some of his previous work — that when he does deliver a hard epigrammatic truth, it hits with special force.
Read Full Review >>
Rave Sue Carter,
The Toronto Star
Despite its preoccupation with death, Beirut Hellfire Society crackles with the kinetic energy of a dancer, thanks to the stories of the fellow misfits Pavlov encounters ... The absurd volume of deaths is also tempered by Hage’s signature dark humour and stylistic playfulness ... is also propelled by the motion of death, which Pavlov observes over and over again in all its gruesome and touching moments.
Read Full Review >>
Positive Nathan Deuel,
The Los Angeles Times
What makes Rawi Hage’s new novel distinct among similar efforts, and worth reading — transcending, as it does, a few moments of overwriting and sloppy summarizing — is the daring way the author illustrates the great and insane freedom that is actually possible in the most dire of circumstances ... Pavlov is an irresistible lead ... In reality, the 'hellfire society' promised by the novel’s title never pulls together as the sort of phantasmagoria you might imagine in a book by a postmodern stylist like Don DeLillo or Thomas Pynchon. Hage is too wedded to a certain understandable verisimilitude, and the register he aims for, when he goes big, is poetic rather than systemic or a more muscular abstraction ... The book is a love note to Beirut, a lament for war, but above all a story of human frailty and our dogged, mammalian battle against failure.
Read Full Review >>
See All Reviews >>
SIMILAR BOOKS
Fiction

Theatre of Marvels
Lianne Dillsworth
Positive
What did you think of Beirut Hellfire Society?
© LitHub | Privacy