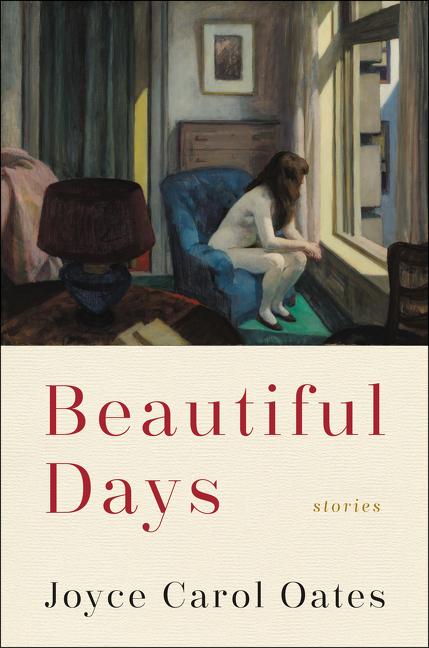 A new collection of stories by American master Joyce Carol Oates, mysterious and surreal, and perfectly pitched for the confusion of the current political landscape.

What The Reviewers Say
Rave Sandra Levis,
Pittsburgh Post-Gazette
Joyce Carol Oates may be criticized in the Twitter-sphere for her frank and controversial observations, but her status as the doyenne of the American short story remains uncontested. In 'Beautiful Days,' the prolific author once again delivers a selection of skillfully written stories as powerful as any she has produced in her long and distinguished career.
Read Full Review >>
Positive Benjamin Markovits,
The New York Times
In general, Oates is dealing here with the academic world — professors and their kids, editors, writers, adjuncts — people who live in the provinces, on the outskirts of real success ... This is Oates’s real trick, that her formal games and realism tend to reinforce each other — they make the same case.
Read Full Review >>
Mixed Sara Cutaia,
Chicago Review of Books
Instead, I found myself asking if Oates was trolling her readers — like her Twitter feed suggests — or if her ideas about men and women are simply outdated ... Beautiful Days does not offer the tender, complicated, flailing characters Oates is known for. Her previous body of work remains lustrous as ever, but I found nothing worth teaching or re-reading here.
Read Full Review >>
See All Reviews >>
SIMILAR BOOKS
Fiction