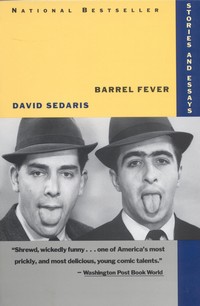 This 1994 collection of short stories and essays by David Sedaris is divided into two sections. The first consists of short fiction and the second half contains autobiographical essays, and includes "The SantaLand Diaries."

What The Reviewers Say
Rave MICHAEL DORRIS,
The Los Angeles Times
Composed of 12 stories and four essays, Barrel Fever is wacky writing par excellence: original, acid and wild ... Beneath their zany discontinuities, Sedaris’ characters are often painfully vulnerable, substituting a stubborn belief in the inevitability of a happy ending for clear sight. No one is more susceptible to this penchant than the author himself, as he switches from fiction to confessional essays at the end of Barrel Fever ... 'The SantaLand Diaries' is an appropriate finale to Barrel Fever for it is both the funniest section of a very funny book and an example of what lifts Sedaris’ humor to a sweet and intellectual plane.
Read Full Review >>
Positive Kirkus
Deadpan exaggeration gives this first collection a satirical edge ... Throughout the collection, without slapping the reader in the face with a political diatribe, the author skewers our ridiculous fascination with other people's tedious everyday lives. Life may be banal here, but Sedaris's take on it is vastly entertaining.
Read Full Review >>
Positive Publishers Weekly
In this collection of short writings that both celebrate and skewer various odd elements of contemporary American culture, Sedaris, who's a regular commentator for National Public Radio, fashions a mordantly comic, outspoken and often delusional narrative, suggesting a caustic mix of J. D. Salinger and John Waters ... Sedaris ekes humor from the blackest of scenarios, peppering his narrative with memorable turns of phrase and repeatedly surprising with his double-edged wit. Just as the reader is convinced by some sharp gem of vituperation, it will turn back and cut its speaker as deeply as its subject.
Read Full Review >>
See All Reviews >>
What did you think of Barrel Fever?
© LitHub | Privacy