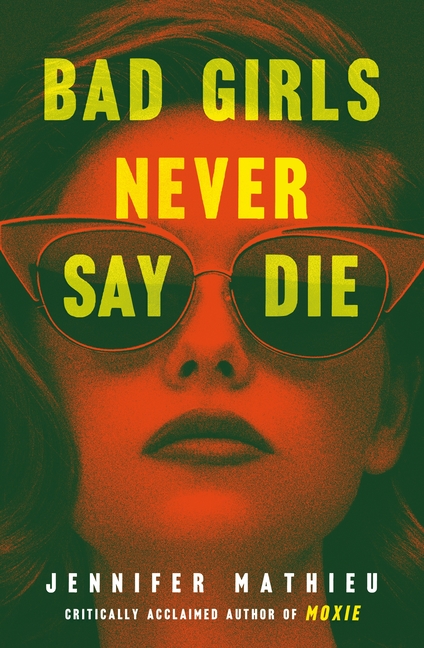 In this gender-flipping reimagining of S.E. Hinton's The Outsiders set in 1964 Houston, Evie must redefine what it means to be a bad girl and rethink everything she knows about loyalty after she is saved from the unimaginable by a good girl from the "right" side of the tracks.

What The Reviewers Say
Rave Nell Beram,
Shelf Awareness
Jennifer Mathieu has rather ingeniously taken the social dynamics of The Outsiders and refocused them on a pack of teenage girls whose low status in 1964 Houston is both a mark against their future prospects and a unifying force ... Bad Girls Never Say Die offers a guided tour through outdated thinking about gender, especially the idea that it's the girl's fault when she's pursued by an aggressively libidinous male. The book has some stock characters, but Mathieu (Moxie) is supremely good at getting at the intuitive feminism of the disadvantaged teenage girls anchoring her story. Bad Girls Never Say Die isn't a corrective to Hinton's timeless work; it's a worthy expansion.
Read Full Review >>
Positive Luis G. Rendon,
BookPage
It’s not quite the equal of Hinton’s grand slam, but Mathieu’s fresh spin makes for a home run of a read ... Mathieu doubles and then triples down on the horrors that women face every day ... Every female character in the book (and there are quite a few) is imbued with depth and purpose, no matter what side of town they’re from or how old they are. They’re all fighting the same cultural force that is determined to keep them down.
Read Full Review >>
Positive Amber Hayes,
Booklist
[A] bold feminist take ... Mathieu takes a well-known archetype and flips it on its head by giving the female characters agency and blurring the lines between what society deems acceptable and unacceptable. She also subtly takes aim at segregation and the society that believes it to be a social good. This important, thought-provoking read will no doubt have a lasting impression on readers.
Read Full Review >>
See All Reviews >>
SIMILAR BOOKS
Fiction