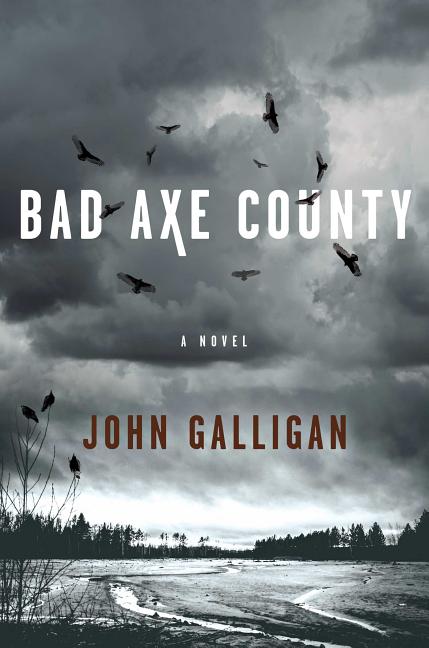 The first female sheriff in rural Bad Axe County, Wisconsin, searches for a missing girl, battles local drug dealers, and seeks the truth about the death of her parents in an alleged murder suicide twelve years earlier.

What The Reviewers Say
Rave D.R. Meredith,
New York Journal of Books
Bad Axe County is the best thriller published this year or maybe this decade ... John Galligan portrays a landscape that tense, brooding, suspenseful, dangerous, and a cast of characters that either ooze with corruption or fight it to the best of flawed abilities ... The winter storm so dangerous in its fury is a metaphor for the dangerous evil assaulting Bad Axe County, and it is very effective ... Seldom does a novel blend setting, character, and plot together so seamlessly that one is so caught up by all three elements, that is no escaping their grip. The only flaw, and that so small that it is almost unnoticeable, is that the murderer of her parents that Heidi seeks is so unexpected because clues to his identity are so faint. Otherwise, Bad Axe County is one damn fine book.
Read Full Review >>
Positive Don Crinklaw,
Booklist
It’s all told in a heightened prose that can be its own worst enemy: the effect is exhaustion as well as exhilaration. Still, this will reward patient readers with its vivid language, which finds fresh expressions for familiar sensations.
Read Full Review >>
Rave Kirkus
Galligan...builds the complex plot of this intense novel around three strong central characters ... well-crafted prose ... His portrait of life in the rural Midwest is about as far from bucolic as possible but vividly convincing. The book pulls no punches in its nightmarish depictions of violence, an essential part of its plot. In its early chapters, the book’s mordant humor, female sheriff, and quirky minor characters echo the movie Fargo, but Galligan raises the stakes beyond the comic. And indomitable Heidi, fiercely smart Pepper, and Angus, goodhearted despite his dreadful upbringing, are characters worth caring about. Striking prose, engaging characters, and a searing story of crimes rooted in the heartland power a darkly irresistible thriller.
Read Full Review >>
See All Reviews >>
SIMILAR BOOKS
Fiction

The Devil Takes You Home
Gabino Iglesias
Positive
What did you think of Bad Axe County?
© LitHub | Privacy