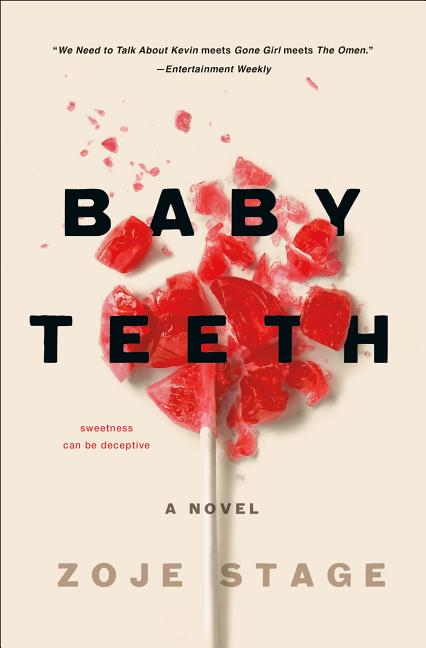 A battle of wills between mother and daughter reveals the frailty and falsehood of familial bonds.

What The Reviewers Say
Rave Jane Murphy,
Booklist Online
Literature has a dark sorority of bad, creepy, and cruel girls, which now includes seven-year-old Hanna Hansen ... Debut novelist Stage has convincingly created one of the youngest villains ever, and readers who appreciate such creepy tykes as Shriver’s Kevin and Doris Lessing’s Ben (in The Fifth Child, 1988) will be unable to resist the urge to meet Hanna.
Read Full Review >>
Mixed Shannon Dyer,
All About Romance
Baby Teeth is a cross between a thriller and a horror novel. I’m not normally a horror fan, but the synopsis for this caught my eye, and I decided to take a chance on the book. Unfortunately, the story leaned a bit too heavily toward the horror side of things, and I found myself pretty dissatisfied ... This novel was incredibly hard for me to get through, and I found the subject matter quite disturbing. In fact, I had the take several breaks from the book, something I rarely have to do. I read a ton of thrillers, so violence isn’t normally a problem for me, but Baby Teeth takes things to the extreme. However, the violence wasn’t the biggest problem. Instead, it was Hannah’s manipulative nature that made me the most uncomfortable. There was something about a child plotting to kill her own mother that set my teeth on edge, and I was quite relieved when I turned the final page ... Her prose is lush without being overly descriptive and she brings her characters to life in a way that is almost startling, and I was able to identify with the difficulties they faced with no problem. But good writing doesn’t necessarily lead to a great book, and I can’t in good conscience recommend Baby Teeth.
Read Full Review >>
Rave Kristin Centorcelli,
Criminal Element
Stage does a fantastic job of steadily increasing the tension to a fever pitch, and Suzette is completely self-aware of her situation. She knows that their lives are the perfect setup for a horror movie. She even mentions to a doctor that she’s afraid no one will believe her and that Hanna will eventually drive her insane. Readers won’t have trouble believing in that possibility. This super creepy kid and her tormented mom will keep you up way past your bedtime.
Read Full Review >>
See All Reviews >>
SIMILAR BOOKS
Literary

Please See Us
Caitlin Mullen
Rave
What did you think of Baby Teeth: A Novel?
© LitHub | Privacy