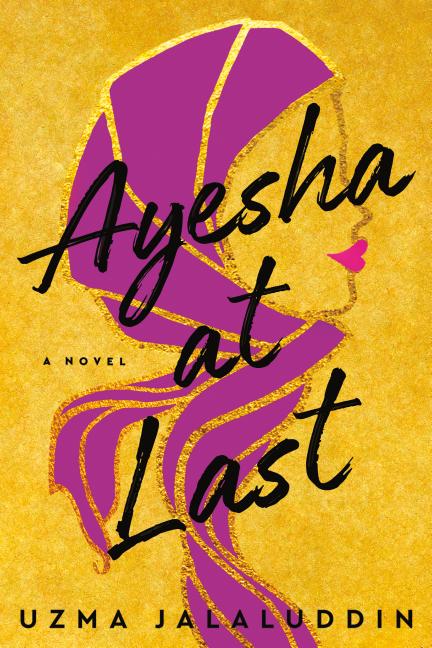 Ayesha and Khalid seem like the most incompatible people until they learn more about each other in this modern-day Muslim Pride and Prejudice.

What The Reviewers Say
Rave Elizabeth Toohey,
The Christian Science Monitor
Does the world need Pride and Prejudice and Muslims? Indeed, it does – at least, it needs Jalaluddin’s version, which is full of wit and verve and humor ... packaged as chick lit, with a silhouetted face with a dash of lipstick, around which swirls a purple hijab on its golden cover, but that’s just the book’s mask – and this is a book that’s all about the masks we wear to protect ourselves or please others. Where the novel shines is as 'immigrant lit,' painting a nuanced portrait of an immigrant community and exploring themes like the intergenerational conflicts that can arise around tradition and assimilation ... light and incandescent and deeply pleasurable from start to finish. You know it’s a good book when it’s obvious from the start who is going to get married, and yet you still can’t stop reading.
Read Full Review >>
Rave Susan Maguire,
Booklist
... will have readers smiling as they recognize the clever ways debut novelist Jalaluddin incorporates Austen’s words into her work. But even more powerful are the updated details ... Mistaken identity, Tim Hortons, a wrestling life coach, a villain who puts Wickham to shame, and a spoiled cousin obsessed with marriage all add to the richness of this winning novel. Ayesha, especially, is Lizzie Bennet-level relatable: sometimes she says more than she should, but she is always true to herself, and it’s pretty swoon-worthy to watch Khalid grow to deserve her.
Read Full Review >>
Rave Kamrun Nesa,
NPR
... stands out beautifully in the crowd ... Understandably, we don't see traditionally sexy scenes in Ayesha at Last, but the palpable friction between Khalid and Ayesha as they dance around like two magnets desperate to connect creates a whole new level of non-physical seduction. Jalaluddin carefully teases out their romance, taking just enough time and adding just enough heat to make it rise as gracefully as Ayesha's grandmother's parathas ... more than just a Muslim retelling of Austen's work; Jalaluddin constructs a timely and enlightening narrative that validates the experiences of many South Asians and Muslims today, while weaving in universal themes of identity, class, and discrimination. Though the topic of arranged marriage is prominent in the story, it acts more as a conduit to start lively debates about tradition and change among the different generations. And by highlighting ideological differences between many of the Muslim characters, particularly Ayesha and Khalid, Jalaluddin helps dismantle the misconception that all Muslims are alike ... In many ways, Ayesha at Last's fictional universe acts as a microcosm of a diverse and oft-misunderstood community, and Jalaluddin's compassionate and sensitive writing about it radiates off the page.
Read Full Review >>
See All Reviews >>
SIMILAR BOOKS
Fiction

How to Fail at Flirting
Denise Williams
Positive
What did you think of Ayesha at Last?
© LitHub | Privacy