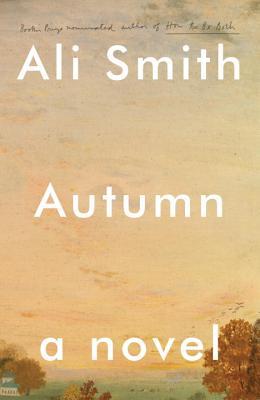 The first in a planned quartet of novels. Set in post-Brexit Britain, a young woman's platonic friendship with an older neighbor is at the heart of this meditation on aging, art, love, and affection.

What The Reviewers Say
Rave Alex Preston,
The Financial Times
Autumn is a novel of ideas, and plot isn’t the reason we keep turning the pages. What grips the reader is the way that Smith draws us deeper into Elisabeth’s world ... the relationship between Elisabeth and Daniel is partly a beacon held up against the darkness that falls in the wake of the vote. Smith is brilliant on what the referendum has done to Britain, the fissures that have appeared ... I can think of few writers — Virginia Woolf is one, James Salter another — so able to propel a narrative through voice alone. Smith’s use of free indirect discourse, the close-third-person style that puts the reader at once within and without her characters, means that Autumn, for all its braininess, is never difficult. Smith feels like a genial guide leading us through a torrent of ideas — about art, history, literature, feminism, memory. This is a novel that works by accretion, appearing light and playful, surface-dwelling, while all the time enacting profound changes on the reader’s heart. In a country apparently divided against itself, a writer such as Smith, who makes you feel known, who seems to speak to your own private weirdnesses, is more valuable than a whole parliament of politicians.
Read Full Review >>
Rave Dwight Garner,
The New York Times
There’s a bit of a Harold and Maude thing going on here. Daniel is a Manic Pixie Dream Oldie, to twist a phrase, as was Harold’s much older friend, played by Ruth Gordon in Hal Ashby’s indelible 1971 movie ... As Elisabeth and Daniel talk, and as Elisabeth processes the events of her life, a world opens. Autumn begins to be about 100 things in addition to friendship. It’s about poverty and bureaucracy and sex and morality and music...All along, in the background, like the lounge music of the damned, there is a sense that a certain kind of world is coming to an end, post-Brexit ... Ali Smith has a beautiful mind. I found this book to be unbearably moving in its playful, strange, soulful assessment of what it means to be alive at a somber time ... Autumn has a loose structure, almost like that of a prose poem. This form is perfect for Smith, because her mind will go where it wants to go. And where her mind goes, you want to follow.
Read Full Review >>
Rave Sophie Gilbert,
The Atlantic
What kind of art will come out of this moment? If Ali Smith’s Autumn is a harbinger of things to come, the work that emerges over the next decade will be extraordinarily rich ... Through Smith’s dazzling, whimsical feats of imagination, a news cycle described by Elisabeth as 'Thomas Hardy on speed' becomes the backdrop for a modernist interrogation of history ... As the novel proceeds, she layers together fragments of books and paintings and song lyrics in an act of literary decoupage, as if to mimic the fragile patchwork of national identity ... Smith, in reckoning with the catastrophe and wreckage of a fraught historical moment, picks through it just as precisely to reveal the beauty and the humanity buried deep below the surface.
Read Full Review >>
See All Reviews >>
SIMILAR BOOKS
Fiction

Aesthetica
Allie Rowbottom
Positive
What did you think of Autumn?
© LitHub | Privacy