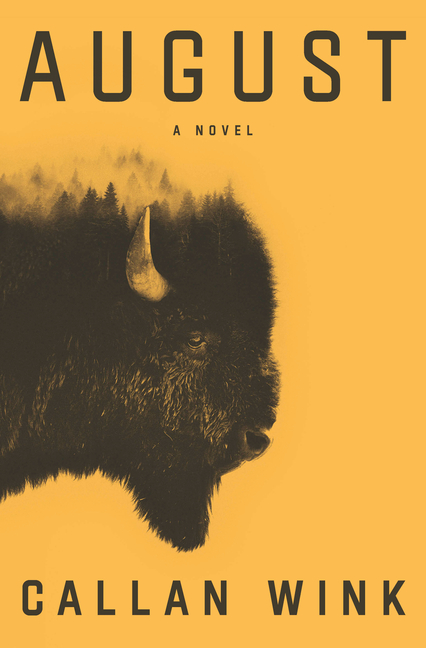 August is an average twelve-year-old. He likes dogs and fishing and doesn’t mind early-morning chores on his family’s Michigan dairy farm. But following his parents’ messy divorce, his mother decides that she and August need to start over in a new town. There, he tries to be an average teen—playing football and doing homework—but when his role in a shocking act of violence throws him off course once more, he flees to a ranch in rural Montana, where he learns that even the smallest communities have dark secrets.

What The Reviewers Say
Rave Sarah Gilmartin,
The Irish Times (IRE)
Callan Wink is an understated writer who doesn’t go in for obvious symbolism, choosing instead details that bring the backdrop of his fiction to life ... It is an elegant, considered novel that charts the joys and traumas that shape an individual. Wink eschews drama for the ordinary revelations of everyday life, but that’s not to say that nothing dramatic happens ... What it means to be a young man growing up in the heartland of America is deftly explored. Wink is interested less in the dramas themselves than in the response of his protagonist ... Those looking for a classical Hollywood structure will be disappointed. There is little build or resolution around events. The narrative progresses as time moves forward and characters come and go. They are no less memorable for it ... The details of farm life in August’s early days in Michigan, his stint in the city and his time spent working for farmer Ancient in rural Montana are all brightly rendered. This rich, clear prose has the rare quality of making anything seem interesting, from the mechanics of a baler machine to the backdrop of a dive bar. Wink’s writing has the deceptive simplicity of greats such as Hemingway or Carver, and the melancholy and pathos underpinning the book has echoes of John Williams’s Stoner ... a writer who is able to take a step back, to flip the obvious on its head.
Read Full Review >>
Positive Drew Hart,
ArtsFuse
For readers who have been missing this kind of vivid realism, it’s pleasing to report that a successor to this writing school has emerged ... A synopsis of Wink’s book may also lead one to wonder what in the hell happened; there is plenty of time and room while reading it to observe that not a great deal does. Initially, you may find the understated nature of this character and his world to be perplexing, possibly dull: drama is portioned out into increments, and many episodes end quietly. But August is funny in a way — over time its small-scale rhythms and monosyllabic reactions generate a comforting beauty that settles in. You develop an ease with its pace, and a curiosity in the ordinary. Montana especially is strongly evoked; I found myself looking up the one-horse towns, rivers, and reservoirs appearing here on Google Maps. In the end, Wink provides some palpable satisfaction, enough so that it’s fair to think that the book is a worthy entry in the tradition, and deserving of the time spent with it.
Read Full Review >>
Mixed Austin Considine,
The New York Times Book Review
America has always had an uncomfortable relationship with its intellectuals — there’s no shortage of evidence lately that hostility toward nuance and sensitivity is a winning strategy in this country. Based on his debut novel, August, Callan Wink seems both attuned to this unfortunate condition of American life and prey to it, which is too bad. A writer with his gifts should feel more comfortable wielding them ... What’s less clear is how we’re supposed to feel about August. As a teenager, he thinks and speaks in the laconic language of a middle-aged malcontent of Raymond Carver’s. No time for women. No stomach for dancing. P.B.R. and pickup trucks: Those are OK ... Wink’s powers are stunning when he describes in crisp, unsentimental prose the physical world framing August’s journey: the breath of cattle on a midwinter day, the taste of raw milk from a Mason jar. But as our guide to this rugged landscape, August is less a person than a caricature, pretentiously unpretentious ... At root, Wink seems to want it both ways — to criticize all that tough-guy distancing while regularly indulging it. In several awkward passages, he sidles into complex ideas but doesn’t want to own them ... Any well-educated American man who grew up in flyover country will be familiar with the pressures, which foster a kind of bipolar intellectual insecurity ... Wink, who is both a short story writer and a fly-fishing guide in Montana, would do well to avoid such traps, though it’s obvious where his affinities lie ... Despite his abundance of lyrical talent, we’ll be sure not to mistake him for some effete literary type.
Read Full Review >>
See All Reviews >>
SIMILAR BOOKS
Coming Soon

The Rib King
Ladee Hubbard
Rave
What did you think of August?
© LitHub | Privacy