Attention: Dispatches from a Land of Distraction 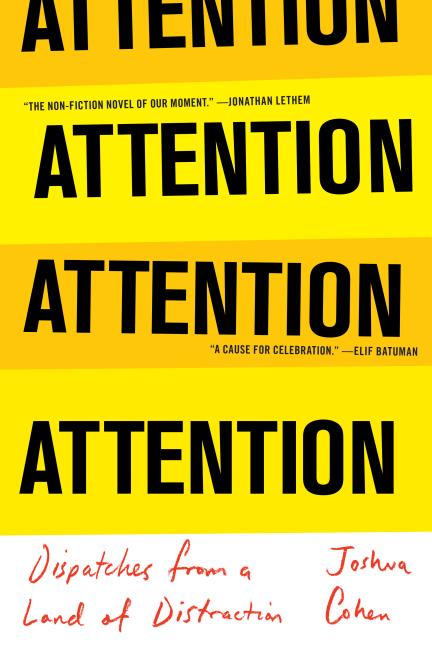 In his first non-fiction collection contemplating life in the digital age, one of Granta’s Best Young American Novelists turns his intellect upon subjects ranging from Bernie Sanders to the closing of the Ringling Bros. circus.

What The Reviewers Say
Rave Zachary Fine,
The Wall Street Journal
He’s filled with just enough venom to want to understand our culture and to criticize it with bruising eloquence ... any attempt at drawing a summary line around its variousness, its frightening range of ideas, or its abundance of voices would be like rounding up a pack of clever raccoons with a shoelace ... This is a collection that’s destined, if not designed, to defeat book reviews. There are too many Joshua Cohens ... Mr. Cohen’s overglutted collection can be exasperating, but it’s still cause for celebration and close study. He is experimenting with the essay form much more, and more cleverly, than any major American writer today ... Mr. Cohen also has a novelist’s knack for slipping in out and of tongues, acrolects and argots—amphetamine-fueled, neuroscientific, Heideggerian, Hebraic, pleonastic, demotic. Overmastering imitation, more than parody, is a keystone of his criticism.
Read Full Review >>
Mixed William Deresiewicz,
The New York Times Book Review
A little pruning would have helped. The only point of opening an essay collection is to spend some time with an interesting mind, and Joshua Cohen—novelist, journalist, critic; prodigy, polyglot, polymath—has one of the most interesting minds in circulation. But half as long would have been twice as good ... The diary entries, sprinkled throughout, are pungent morsels of observation. But sustained ideas are harder to come by. Cohen is a drive-by intellectual who moves too fast to question his conjectures—if it occurs to him, it must be true—a verbal prestidigitator who’s inclined to let his language do the thinking for him ... Cohen is most at home, and Attention is at its best, in 'Abroad.' The section is heavy on literary criticism, the mode in which he goes deepest, because he goes slowest, and in which he is able to bring his learning, as well as his artistic experience, most fully to bear. There are actual arguments here, often brilliant ones ... His solipsistic immaturity can sometimes bother me, but his truculent bravery often delights me.
Read Full Review >>
Positive Rob Merrill,
The Associated Press
If curiosity is a writer’s greatest innate gift, Joshua Cohen may be America’s greatest living writer. Or maybe just the most focused. His first collection of non-fiction...is dazzling in its scope, but, oh the irony, it’s also very hard to get through ... what you have is a hodgepodge of writing that makes your head spin ... Digested in very small doses—an essay per night before bed, say, or a short one on the john—it will still take you weeks to reach the end of this book. And when you get there, you’ll probably have forgotten how Hrabal redeemed Socialist Realism. Still, writing like this does deserve some praise. Cohen truly commits to his subjects, dropping knowledge and literary criticism all over the place ... The whole book is like that, filled with topics that will be foreign to most readers, forcing them to really engage if they want to comprehend any of it ... you’ll find essays here to love ... You’ll just have to work at it.
Read Full Review >>
See All Reviews >>
What did you think of Attention: Dispatches from a Land of Distraction?
© LitHub | Privacy