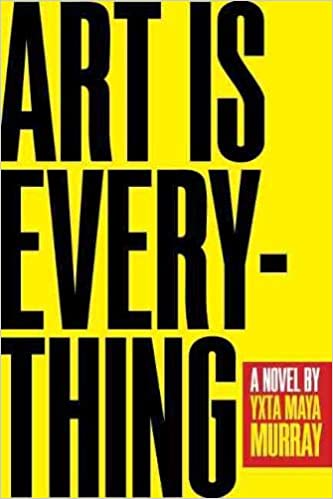 Written as a series of rogue web posts, Instagram essays, rejected Yelp reviews, and SmugMug streams-of-consciousness that merge confession with art criticism, Art Is Everything is the story of an artist whose world implodes--just as she has a breakthrough.

What The Reviewers Say
Positive Lauren O\\\'Neil Butler,
Bookforum
Yxta Maya Murray does something similar to Tillman in her latest novel, Art Is Everything , with dashes of Sontag’s penchant for philosophy and Smith’s attention to identity and belonging. Murray is a law professor, novelist, and an art critic. Much of the content here reflects the author’s understanding of how Chicana artists have navigated the racist demands of the lily-white art world. Murray also updates the innovations of Tillman and others (including Lippard, whose novel is great) by having the book mirror the feel of online postings that double as art criticism ... Though the novel’s reprises irked me, it helped to keep in mind that Amanda seems to be online 24-7 and that many of the chapters are styled as overlong, sometimes unpublished posts on Instagram, Yelp, Wikipedia, and Vimeo, among other platforms ... She is grieving, has lost everything, and yet she still wants to make art. What’s more, she desires to be connected with the artists before her who have drawn on their pain to make formidable work.
Read Full Review >>
Positive Letitia Montgomery-Rogers,
Forward Reviews
Portraying an unsuccessful artist’s glide into washout and reinvention after capitalism’s unequal demands erode their ability to create, Yxta Maya Murray’s novel Art Is Everything is a candid critique of society’s usurious relationship with BIPOC, queer, and working-class women artists ... the novel reads like an experimental, unauthorized didactic on the lived reality of marginalized artists and their relationship with institutions ... The novel evolves and transforms the idea that art is everything until it encompasses a state of being wherein art is the undeniable core of an artist’s existence and of all of the actions of their life.
Read Full Review >>
Positive Publishers Weekly
... a fascinating if uneven portrait of a Latinx artist as she struggles to balance life and art. The narrative takes the form of a shifting series of Wikipedia entries, snippets of confessional autobiography, blog entries, Snapchats, Instagram posts, marketing copy, and unpublished Yelp reviews as Los Angeles performance artist Amanda Ruiz navigates identity, the difficulties of making art as a marginalized woman, and a desire for love ... While long passages of art criticism serve only to restate themes evident in the primary narrative, such as the art world’s white hegemony, Amanda’s story feels immediate. Murray’s attempt to challenge traditional narrative structure along with definitions of sexuality and art takes on a bit too much.
Read Full Review >>
See All Reviews >>
SIMILAR BOOKS
Fiction

All the Broken Places
John Boyne
Mixed
What did you think of Art Is Everything?
© LitHub | Privacy