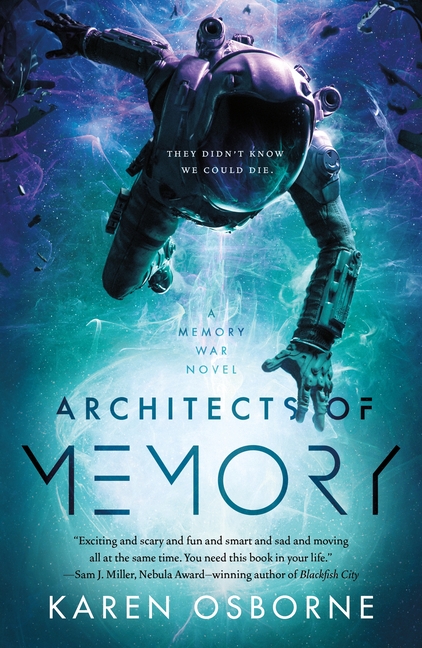 Terminally ill salvage pilot Ash Jackson lost everything in the war with the alien Vai, but she plans to buy, beg, or lie her way out of corporate indenture and find a cure. When her crew salvages a genocidal weapon from a ravaged starship above a dead colony, Ash uncovers a conspiracy of corporate intrigue and betrayal that threatens to turn her into a living weapon.

What The Reviewers Say
Rave Laura Hubbard,
BookPage
Karen Osborne’s debut, Architects of Memory, is a must-read for anyone who loves a good space romp. Part social commentary and part space opera, it is comfortable sitting between worlds ... From predatory contracts that force uncitizens into near slavery conditions to the banal evil of corporate governance, there is plenty to horrify and excite within Osborne’s rich galaxy ... Architects of Memory is full of small surprises easily spoiled, and readers who like figuring out those little mysteries could easily be deprived of a few good ones. For readers who have already read too much, don’t worry—plenty more surprises lie in wait ... A timely and powerful read, Architects of Memory will leave readers thinking for weeks to come.
Read Full Review >>
Positive Kibby Robinson,
The Nerd Daily
... a stellar debut ... On the surface,Architects of Memory seems like a story we’ve seen before in the science fiction world. Humans have gone to space, corporations take capitalism to the extreme, first contact does not go well, and our hero uncovers a conspiracy. All good stuff, but nothing specifically new. And then you meet the characters…Architects of Memory is a novel that is driven by plot, but made all the better by the characters ... The characters are just themselves and seeing these parts of who they are expressed in such a natural way brings a sense of connection and authenticity to the story that is sometimes lacking in science fiction ... Where Architects of Memory falters is the pacing. We flip flop between action-packed moments and clunky info dumps throughout most of the story. And while everything that is happening is intriguing, it’s hard to stay fully engaged when the action dies down. Stories have to have their slower moments in between the action scenes, but the transition between the two were not smooth here. There were some good plot twists that were dropped at just the right times to keep you wanting to read more ... Her subtle way of building up characters brings them to life in ways that few authors can achieve.
Read Full Review >>
Mixed Adrienne Martini,
Locus
At times, Architects of Memory fires on all cylinders. The story is clear, as are the characters’ motives and the stakes. At times, though, this clarity of purpose wanders away or gets mired in scenes that don’t seem to fit with the story Osborne is telling. This is Osborne’s debut work of full-length fiction...and it is a capable, if at times uneven, step into a new part of the field.
Read Full Review >>
See All Reviews >>
SIMILAR BOOKS
Fiction

Nona the Ninth
Tamsyn Muir
Positive
What did you think of Architects of Memory?
© LitHub | Privacy