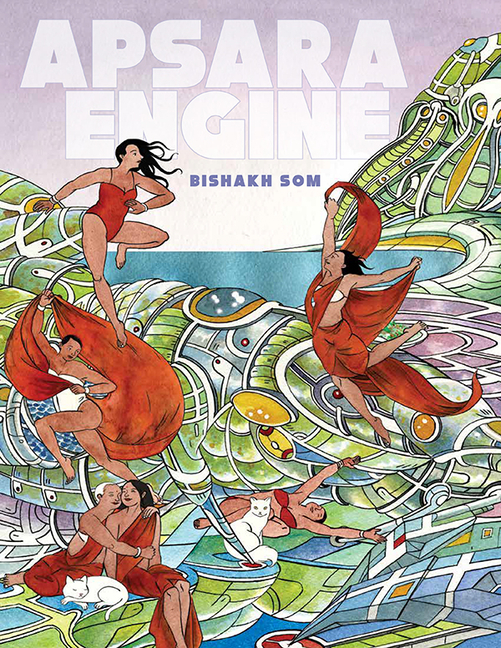 By turns fantastical and familiar, this graphic short story collection with South Asian roots is immersed in questions of gender, the body, and existential conformity.

What The Reviewers Say
Rave Etelka Lehoczky,
NPR
You might classify these comics as 'literary,' but Som's approach to storytelling is as uncanny as her style and themes. Even the book's structure keeps the reader off-balance. Som intersperses tales of future civilizations and half-human hybrid beasts with vignettes of run-of-the-mill contemporary life, so the reader never knows if something odd is about to happen ... The cryptic, virtuosic 'Swandive' explores trans identity, a theme Som — who is trans herself — has addressed before. But even when Som's not talking specifically about trans issues, Apsara Engine reflects what could be called a trans aesthetic. Evading standard categories and unsettling familiar narrative patterns, the book is a testament to how trans experiences can teach us entirely new ways of imagining our humanity ... Som's artistic style breaks boundaries, too. She'll employ traditional comic-book techniques for page layouts and character designs, then toss them aside with the turn of a page. A character who's drawn iconically, with just a few efficient lines defining her features, will become lushly realistic at a pivotal moment. A story drawn in the usual square panels will suddenly burst forth into a series of flowing, uncontained two-page spreads ... Such moments of explosive transition provide the book's heartbeat. It's a mesmerizing arrythmia ... But while Apsara Engine is marked by such dualities — fluidity vs. geometry, India vs. the West, nymph vs. engine — it's most remarkable when it leaves duality, and other well-worn literary tropes, behind. Som isn't always successful in her attempts to find new ways to tell stories, but she's always intriguing. Best of all, she's uncanny.
Read Full Review >>
Positive Bedatri B. Choudhury,
Hyperallergic
Som’s graphic novel comprises eight seemingly disparate narrative portraits. Each expressive short story is set against soft, dreamy, watercolor backgrounds, and accompanied by exquisite calligraphy. The protagonist is always a South Asian-ish queer person who inhabits the in-between spaces nestled between dreams and realities, the domestic and the public, the real and the surreal. Among the novel’s most striking elements are Som’s drawings of femme-beast hybrids and her celebrations of femme friendships and communities ... Som came out as trans roughly midway through writing Apsara Engine. While far from being autobiographical, the collection acts as a sieve that collects the author’s old and new selves, the worlds in between, the communities she met along her journeys, and maps of the worlds she imagined. While I formed an instant kinship with the recurring and unabashedly Bengali elements in her work, my curiosities were simultaneously tickled by aspects I didn’t fully comprehend. Much like a map, Som’s novel opens up a portal and lets us imagine all the places it could take us to.
Read Full Review >>
Rave Stephanie Burt,
The Georgia Review
...ambitious ... as Som draws the cloverleaves and paths and garden-diagrams and high-tech interiors that constitute their imagined city—it’s the refuge and utopia and future that stressed-out trans people today may want, the sort of science-fictional place that lets us imagine how to improve the real one. Imagined places, after all, exist in our heads, doubly so when we write and draw and share them ... Som’s architectural background finds magnificent use in the cityscapes, bicycle paths, and engineered chambers ... This kind of imaginative exploration, where we can dial up and then dial down the sense of wonder, the distance from real life, seems peculiarly suited, as well, to lives that were fantasies before they were lived ... these books are strongest when most enchanting, most able to swoop and leap and draw new maps and get far off the ground ... I want Som to draw—because I want to see—what they see.
Read Full Review >>
See All Reviews >>
What did you think of Apsara Engine?
© LitHub | Privacy