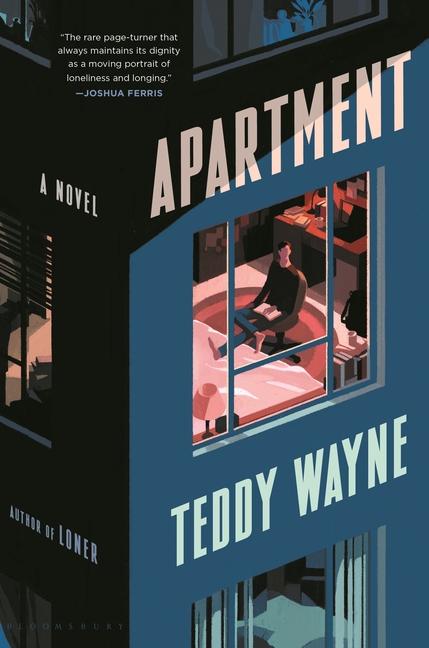 In 1996, an unnamed narrator attending the MFA program at Columbia on his father's dime. Feeling guilty about his good fortune, the narrator offers his spare bedroom—rent-free—to Billy, a classmate from a working-class family in the Midwest. As the semester progresses, the narrator's rapport with Billy develops into a friendship, but the close quarters and power imbalance of their living arrangement breed tensions that neither man could predict.

What The Reviewers Say
Rave Beth Mowbray,
The Nerd Daily
At the core of Apartment is a unique examination of male friendship, male identity. Wayne deftly chronicles the devolution of a friendship, slowly unwinding, thread by uncomfortable thread ... Wayne also astutely explores how one decision can alter the course of a life, triggering a domino effect—how one may look back in hindsight and feel regret for decisions made, only after learning of the bitter outcome. If you enjoy character-driven novels, you will likely appreciate Wayne’s examination of friendships, class, power, gender, and sexuality here. More than just the simple storyline posed at the outset, Apartment delves into these deeper constructs through the lens of mid-late ‘90s New York in a fresh, biting way. A bit unconventional, this is the type of book that wasn’t begging me to pick it up, but did not easily allow me to put it down once I started.
Read Full Review >>
Mixed Andrew Martin,
The New York Times Book Review
Since Wayne is a veteran writer, he knows that we know what he’s doing in these opening pages. He’s setting himself the difficult task of asking the reader to cut through numerous layers of prophylactic irony — the unnamed narrator protecting himself, as an insecure aspiring writer; the author operating within the limited skill set of his narrator — to access some deeper emotional truth about these characters. It’s to Wayne’s credit that he often succeeds, despite the sometimes-maddening (I know, he knows!) flaws that he’s painstakingly signposted ... the roommates pivot on questions of gender and sexuality, questions to which I found Wayne’s approach at once overly cagey and too on-the-nose ... Wayne’s choices here 'work' in the sense that we believe his narrator would, were he writing the novelization of his life, handle his discomfort with his body and feelings with these kinds of hints and dodgy revelations. But at the same time, it feels a little cheap to turn the central character’s genuinely poignant longing and trauma into a scavenger hunt ... I couldn’t help feeling that the busyness and extremity of the plot’s denouement undercut the author’s otherwise humane sensibility. In other words: Just because he told me he was going to flinch doesn’t mean I wasn’t disappointed when he did.
Read Full Review >>
Positive Rumaan Alam,
The New Republic
When the relationship between the two men begins to fray, you wonder if this won’t turn into a thriller—it’s so easy to imagine masculine feeling sublimated into violence! Wayne doesn’t give us crime, but the passion beneath it; that’s far more surprising, and makes for a much more difficult book ... I’m dancing around the specifics because there’s a pleasure to Apartment that it would be unfair to spoil. It’s an enjoyable read (a taut story that the author bravely sees through to its inevitable end) with some insight into the strange condition of manhood.
Read Full Review >>
See All Reviews >>
SIMILAR BOOKS
Fiction

Mount Chicago
Adam Levin
Mixed
What did you think of Apartment?
© LitHub | Privacy