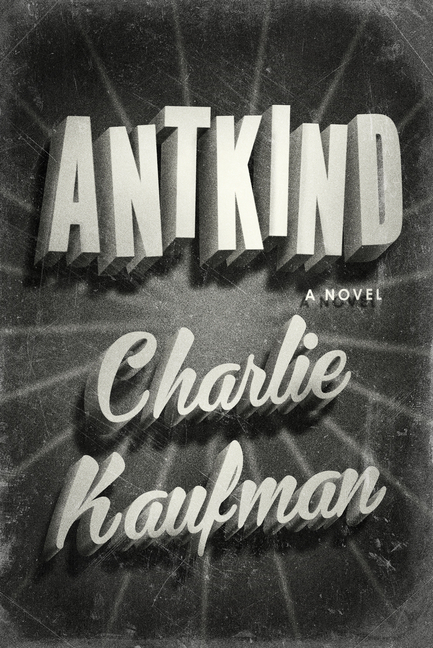 B. Rosenberger Rosenberg, neurotic and underappreciated film critic, stumbles upon a hitherto unseen film made by an enigmatic outsider—a film he’s convinced will change his career trajectory and rock the world of cinema to its core. His hands on what is possibly the greatest movie ever made, B. knows that it is his mission to show it to the rest of humanity. The only problem: The film is destroyed, leaving him the sole witness to its inadvertently ephemeral genius.

What The Reviewers Say
Rave Anita Felicelli,
Los Angeles Review of Books
Like his films, Kaufman’s tremendous, bonkers first novel Antkind is an artistic consideration of consciousness ... this is a voice-driven novel, and it’s Rosenberg’s self-observation that keeps you reading ... his vivid and relentless speech is weirdly compelling. His voice is mesmerizing: awful and yet funny, magnetic, and oddly vulnerable in its bluster ... Rosenberg’s voice is also what produces the novel’s compelling and excruciating anguish: about communicating the entirety of one’s experience to another, different consciousness with different references. And that anguish is only heightened by the flood of storytelling and film allusions, the way the novel begs to be deconstructed at every turn, asking, do you get it? ... A reader’s ability to enjoy a self-consciously long, free-range 'strange cosmic entertainment' of this intensity and loopiness...is subject to what constructs the reader brings to it. If you don’t know half the allusions, the wordplay and the depth of references might be lost, as so much surface glitter ... It’s a thrilling first novel trying to assume the form of consciousness itself, with all its digressions and delusions ... Antkind is Kaufman pushing himself to every formal and social limit, no holds barred, bleak and devastating, yet marvelous.
Read Full Review >>
Rave Matthew Specktor,
The New York Times Book Review
Pompous, opinionated, self-conscious, self-loathing, B. is an astonishing creation: a volcano of ridiculous opinions and absurd neuroses, a balding, bearded nightmare of a person whose involutions could practically carry a 700-page narrative by themselves because they, and he, are so riotously funny ... Anyone who’s ever seen a Charlie Kaufman film will recognize the landscape here: a loose-but-faithless representation of 'reality' that ripples with psychedelic strangeness ... If only this summary did any kind of justice to the ferocious comedic energy of the book’s opening, or prepared one for the imaginative maelstrom to follow. It must be said that, by any standard — and even for someone who remembers the shock of Kaufman’s work when it was passed around Hollywood as unproduced samizdat in the 1990s — Antkind is an exceptionally strange book. It is also an exceptionally good one, and though one is tempted to reach for the roster of comparably gnostic novels by contemporary (-ish) writers — not just Wallace, but Pynchon, obviously; John Barth; Joshua Cohen, perhaps — such comparisons inevitably collapse ... The novel’s doublings and redoublings are sometimes confounding, its perversions of an already-perverse reality so lavish as to verge on the gratuitous, and yet. …I’m hard-pressed to call the book 'difficult,' simply because its portrait of B. is so oddly humane and because its baseline energies are closer to those of a Tex Avery cartoon (or an Abbott and Costello routine) than they are to the dauntingly postmodern tradition of which the book also partakes ... Even at its most hallucinogenic, <Antkind remains appealingly earthy ... In a world that is endlessly reshaping itself in the grips of malign and incomprehensible powers, we are all hapless Punchinellos, like B. And yet it is only through being such that we can find — as Kaufman’s novel does, too — anything resembling grace.
Read Full Review >>
Rave Gabino Iglesias,
NPR
... a novel only Charlie Kaufman could have written. I'm aware of how vague that sentence is, but I assure you it fits the novel perfectly. Antkind is strange, disjointed, and obsessive. It's also a wildly imaginative narrative in which Kaufman mentions himself several times, discusses his own work, and claims no one has made a 'real' movie about New York. You could call it a brilliant piece of metafiction or a marvel of postmodern storytelling and you'd be right — but you could also call it bloated or a flashy, eloquent mess and you'd also be right. Ah, subjectivity ... If we are to measure great novels by their ability to surprise readers, then Antkind is a great novel. You never know what will come next ... Kaufman gave his main character a series of fixations and then milked them for all they're worth, while simultaneously offering a thinly veiled critique of the role of social media in our daily life and writing a bizarre love letter to movies ... The one thing that can be said about this book with certainty is that Kaufman is a master of language. He shows this time and again throughout the 750-page reading experience that is Antkind. His sense of humor injects many passages with a unique electricity that makes them memorable and the characters, cultural products, and events he's created speak volumes about his seemingly endless imagination ... On one hand, it is everything we have come to expect from Kaufman: A sharp study of humanity that is aware of place and pays attention to our inner worlds and the ways our filters and preconceived notions affect everything we see and do. On the other hand, this is — to use Kaufman's own words — 'muddled, incoherent, and fetishizing.' The debates about race, for example, add nothing of value to the discussion. In fact, they are the mental meanderings of a white man trying to understand what Otherness means, and we have enough of that already ... But that's just one aspect of a novel that is packed with different elements. Antkind is a bit overstuffed, but we all overstuff ourselves at a buffet once in a while. What matters is this is that this is an entertaining, unapologetic book that never steers clear of — well, anything. And watching Kaufman recklessly throw himself at everything with a backpack full of words is a sight to behold.
Read Full Review >>
See All Reviews >>
SIMILAR BOOKS
Coming Soon

What Could Be Saved
Liese O'Halloran Schwarz
Positive
What did you think of Antkind?
© LitHub | Privacy