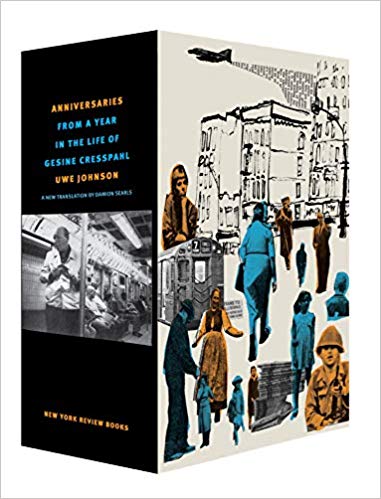 Gesine Cresspahl, a 34-year-old single mother and German émigré to Manhattan during the Vietnam War era, navigates daily life alternating between sharp attention to the world around her and extended reminiscences about her German childhood during World War II, in which her father worked for the resistance as a British spy but later spent time in a Soviet prison camp.
Positive
Based on 6 reviews

What The Reviewers Say
Rave Parul Sehgal,
The New York Times Book Review
Anniversaries [is] Uwe Johnson’s oceanic, nearly 1,700-page masterpiece ... It is a novel that swallows reality — as noisy and demanding as the world itself ... Anniversaries is not difficult reading, but it is painstaking. The story is tangled, the characters traumatized and suspicious of language. It requires a hard chair, a fresh pen and your full attention — for attention is its great subject ... The excess of this book can feel occasionally oppressive, the detail mismanaged even — must every tertiary character come equipped with such a lavishly imagined back story? But two days without the novel now, and I’m lonesome for its patient, laboring gaze, a kind of holy attention that Gesine recalls in her youth...
Read Full Review >>
Positive Becca Rothfeld,
Bookforum
Uwe Johnson’s Anniversaries is a book to live in: two volumes and more than 1,700 pages of roomy universe, robustly imagined and richly populated ... But Johnson’s rhythm is always patient, always mesmerizingly meticulous ... Anniversaries...is something between a diary, an autobiography, and an exercise in free association. Many of Gesine’s entries amount to love letters to her adoptive city ... Her meditations are dense with diatribes—so dense with diatribes that they begin to try a reader’s patience—against the Vietnam War, which she likens with great sanctimony and little subtlety to the Holocaust. But Johnson’s heroine is alive to the dangers of hollow outrage and dry documentation ... Unlike her borrowed reportage about the atrocities in Vietnam, her direct accounts of Nazi and Soviet brutality are relentless and rending ... Johnson is at his best when he personalizes an aching, anonymous history. Anniversaries’ engagements with the past can be palpable and piercing ... Anniversaries is less a work of plot than a map of human relationships ... Anniversaries is often difficult to follow: It demands an involved knowledge of German, Soviet, and American politics and a careful attention to what seem like marginal characters, who are apt to disappear for several hundred pages only to crop up again. Its content, in contrast, can be ethically easy. All of its protagonists are implausibly brave ... But ... How does Johnson know...about everything? How does he absorb so much so hungrily? His writing is inhuman, godlike in its immensity.
Read Full Review >>
Positive Charity Scribner,
4Columns
Many consider Uwe Johnson’s Anniversaries to be the most important German novel of the postwar period. Conceived in New York in the mid-1960s and set there around the year 1968, the multi-volume work reflects on the global political antagonisms of that time and relates them to the emergence of fascism in Europe in the 1930s ... The book’s German title is Jahrestage, or literally 'days of the year.' Each of its central chapters marks a single day in the life of the protagonist, Gesine Cresspahl, from August 20, 1967, to August 20, 1968. The calendar imposes a rigorous, almost mathematical structure on the novel ... Anniversaries has generated a dynamic body of criticism. Some have warned against a canonization of the work, which Johnson might have bid for in his precarious invocation of 'Death Fugue' as a foundational intertext. But, at the same time, the novel is a labor of memory. As he looks to the past, Johnson describes the absences that follow genocide—the voids of language and culture.
Read Full Review >>
See All Reviews >>
What did you think of Anniversaries?
© LitHub | Privacy