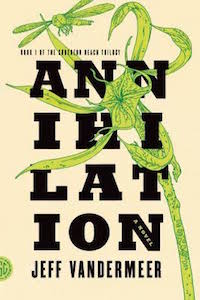 Winner of the Nebula Award

A group of women set out for Area X to map the terrain, record all observations of their surroundings and of one another, and, above all, avoid being contaminated by Area X itself.

What The Reviewers Say
Rave Joshua Rothman,
The New Yorker
Teams of explorers are sent into Area X. They find that the nature there is strange. The purple thistles seem unnaturally eager. The sky is too full of birds; the long grass is teeming with little red grasshoppers. Everything is too alive. The explorers feel watched by things—plants, the sky—that can’t actually watch; in a paranoid moment, one of them suggests that all of Area X could be camouflage for a single, diffuse living process or thing … In today’s literary landscape, it’s natural for the Southern Reach books to find themselves grouped together with the broadly ecological, post-apocalyptic stories that are now in vogue. But there’s not much that’s post-apocalyptic about VanderMeer’s novels. They’re not interested in how life ends, but in how it changes, and they are fascinated by the question of persistence through change.
Read Full Review >>
Rave Sara Sklaroff,
The Washington Post
Annihilation is successfully creepy, an old-style gothic horror novel set in a not-too-distant future. The best bits turn your mind inside out … Like the expeditions that preceded them, this group does not fare well. ‘We were scientists, trained to observe natural phenomena and the results of human activity,’ the biologist says. ‘We had not been trained to encounter what appeared to be the uncanny.’ And as in a classic work of horror, the ‘monster’ they find inside the tower-tunnel is not even as terrifying as the biologist’s discovery that almost everything she had been told about Area X was fundamentally untrue.
Read Full Review >>
Mixed Tom LeClair,
The New York Times Sunday Book Review
No spoiler alert is needed because we know the narrator escapes to tell the tale, which is ponderously plotted, often abstract in style and not very scary, possibly because Annihilation is the first book of a projected trilogy but probably because the novel is really about itself and its genre … Details from the biologist’s past — she was a loner who would rather observe a tide pool than participate in her marriage — fill out the metafictional allegory, but without convincingly establishing the biologist’s motivations for her risky behavior, motivations that might have made Annihilation not just intriguing but affecting.
Read Full Review >>
See All Reviews >>
What did you think of Annihilation?
© LitHub | Privacy