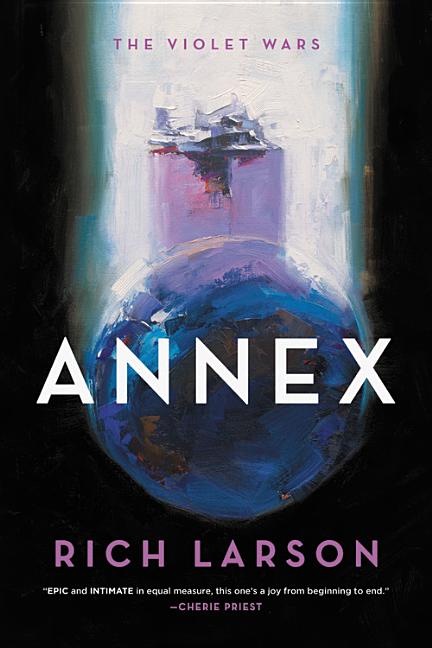 The story of two young outsiders who must find a way to fight back against the aliens who have taken over their city.
Rave
Based on 4 reviews

What The Reviewers Say
Rave Gary K. Wolfe,
The Chicago Tribune
If that sounds like something of a mashup, Larson manages to weave all this into an energetic, nonstop adventure that’s thoroughly his own, mostly because of an appealing cast of young protagonists, led by the street-smart Violet. As a trans teenager, Violet had to learn survival strategies long before the aliens arrive ... While Annex is a solid adventure by itself, it's also the beginning of a trilogy, and most readers will be eager to see where volume two leads.
Read Full Review >>
Rave Sam Riedel,
Barnes and Noble
Five pages into Annex, the debut novel by Rich Larson (best known as the prolific author of much-anthologized short fiction), I knew I was reading something special—but I wasn’t prepared for just how special the book would turn out to be, or why. An insightful and piercing, young adult-leaning science fiction thriller ... Annex demonstrates the value of coalition and understanding, the difficulty of dealing with abusers who are 'on your side,' and the vitality of family through a lens that couldn’t be more timely. In all its painful and twisted glory, it is my early pick for book of the year.
Read Full Review >>
Mixed John Silbersack,
Publishers Weekly
Debut author Larson attempts to create a diverse cast of kids fighting back against an alien menace, but the story’s flaws overshadow an otherwise promising premise ... Though marketed as an adult novel with young adult crossover appeal, it’s hard to imagine readers of any age finding this poorly characterized story satisfying.
Read Full Review >>
See All Reviews >>
SIMILAR BOOKS
Fantasy