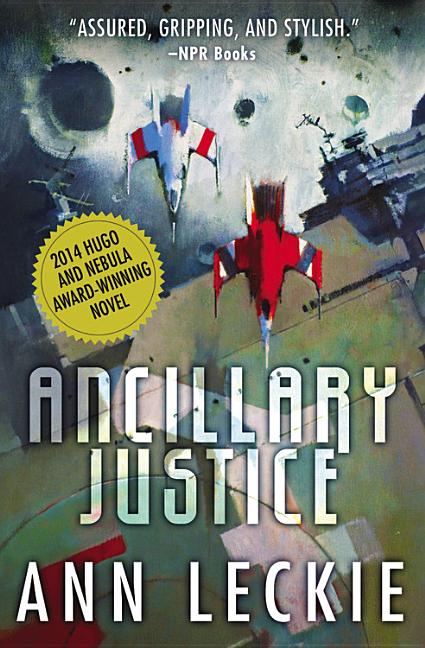 Once, she was the Justice of Toren - a colossal starship with an artificial intelligence linking thousands of soldiers in the service of the Radch, the empire that conquered the galaxy. Now, an act of treachery has ripped it all away, leaving her with one fragile human body, unanswered questions, and a burning desire for vengeance. The only novel to ever win the Hugo, Nebula, and Arthur C. Clarke awards.

What The Reviewers Say
Rave Liz Bourke,
Tor.com
It’s not every day a debut novel by an author you’d never heard of before derails your entire afternoon with its brilliance. But when my review copy of Ancillary Justice arrived, that’s exactly what it did ... does many things extremely well ... Leckie’s prose is clear and muscular, with a strong forward impetus, like the best of thriller writing. It grabs you and urges you onwards. And her interleaved narrative is both clever and well-executed: clever, because alternating past and present heightens the novel’s tension, ratcheting up the what happens next? factor, and well-executed because most of the breaks and pauses seem entirely natural, rather than forced ... Leckie writes a rousing climax and sticks the dismount ... As for worldbuilding: Leckie’s really good at it ... both an immensely fun novel, and a conceptually ambitious one: it has many layers and many levels at which it can be enjoyed. And I can’t hardly wait for the sequel.
Read Full Review >>
Rave Graham J. Murphy,
The Los Angeles Review of Books
... deserves its awards and acclaim. The series is a stunning achievement that belongs on anyone’s 'must-read' list, even if they aren’t necessarily fans of science fiction ... Breq can be an off-putting character at times, demonstrating minimal levels of emotional warmth ... These at-times-jarring shifts in points of view unashamedly make demands upon the reader’s attention, but those demands are well worth the effort: they provide a narrative scope that remains grounded in the experiences of its protagonist while offering Leckie the luxuries (and advantages) afforded to a third-person perspective ... thoughtful, exciting, well paced, fascinating, and awe inspiring in its narrative intricacies. It exemplifies not only what the best space opera can achieve, but also the best of what science fiction can offer.
Read Full Review >>
Rave Genevieve Valentine,
NPR
... assured, gripping and stylish ... the tale of an empire, and in its smallest a character study, and part of debut novelist Anne Leckie's achievement is how she handles her protagonists in both of those contexts ... Though framed like '70s grindhouse — there was a setup, and someone's out to clean the slate — things unfold studiously, reminiscent of the deliberation underscoring Ursula Le Guin's The Left Hand of Darkness ... Each character adds texture to the picture that slowly emerges ... The universe of Ancillary Justice is complex, murky and difficult to navigate — no bad thing, as Leckie's deft sketches hint at worlds beyond, none of them neat ... A space opera that skillfully handles both choruses and arias, Ancillary Justice is an absorbing thousand-year history, a poignant personal journey, and a welcome addition to the genre.
Read Full Review >>
See All Reviews >>
SIMILAR BOOKS
Fiction

The Women Could Fly
Megan Giddings
Rave
What did you think of Ancillary Justice?
© LitHub | Privacy