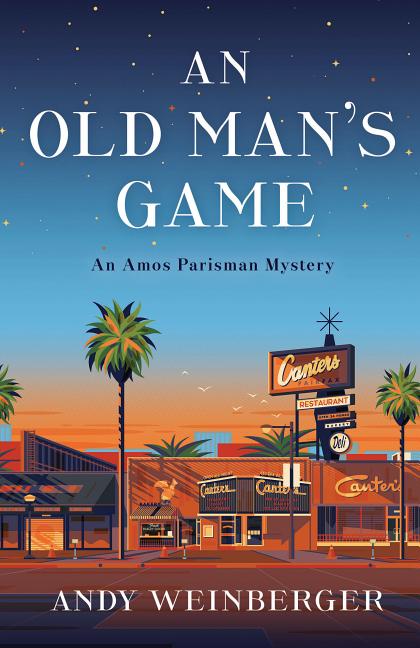 When a controversial rabbi drops dead over his matzoh ball soup at Canter's Deli in Los Angeles, retired private eye Amos Parisman is hired by the temple's board to make sure everything is kosher. As he looks into what seems to be a simple, tragic accident, Amos uncovers a world of treachery and hurt that shakes a large L.A. Jewish community to its core.

What The Reviewers Say
Rave Urban Waite,
The San Francisco Chronicle
... pure entertainment ... As characters go, Parisman is as no-nonsense as Philip Marlowe or Sam Spade, but unlike those classic detectives, there’s a bit more heart and nuance to our central character. Somewhere in his late 60s, Parisman is well-drawn, with many supporting characters feeling just as real as he does ... The plot draws the reader along at a fast clip, moving from one clue to the next. As each new bit of information leads on, Weinberger is also playing a little sleight-of-hand with the reader ... It’s not unlike many other P.I. novels. But the way Weinberger manages it, doling out clues here and there, showing one thing, only to take it back later, is mesmerizing and also frustrating in the same way a puzzle might be until it’s finished and you can see the whole, beautiful thing for what it is.
Read Full Review >>
Positive Tom Nolan,
The Wall Street Journal
... delightful ... Mr. Weinberger writes as his hero detects, at a measured and thoughtful pace. Most of the book’s violence takes place offstage, leaving the detective to ponder and ruminate in contemplative fashion. And Amos himself proves pleasant company: a gruff mensch whose avowed atheism is balanced by a humanism that sees him tenderly caring at home for his dementia-prone wife. 'Everybody matters,' he says at one point, and as we follow his quest to find out what happened to Rabbi Ezra, we know he means it.
Read Full Review >>
Positive Jonah Raskin,
The New York Journal of Books
Weinberger’s detective speaks some Yiddish, which adds spice to this tale of crime and its detection in and around a synagogue where an unorthodox rabbi named Ezra dies while eating matzo ball soup ... Weinberger has sprinkled satire and a wry sense of humor on almost every page ... doesn’t just offer light entertainment, though there is plenty of that. It also offers plenty of stick-to-your-ribs-food for thought on Israel, anti-Semitism, Zionism, Jews, and Palestinians.
Read Full Review >>
See All Reviews >>
SIMILAR BOOKS
Fiction

A Will to Kill
Rv Raman
Positive
What did you think of An Old Man's Game: An Amos Parisman Mystery?
© LitHub | Privacy