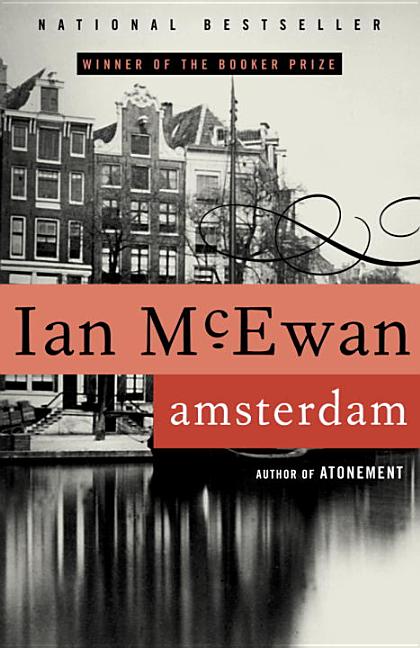 From the acclaimed author of Atonement, the Booker Prize-winning contemporary morality tale (cleverly disguised as a comic novel) about two men and a plan to die.

What The Reviewers Say
Rave Ron Charles,
The Christian Science Monitor
The boiling wit of Amsterdam won't be everyone's cup of tea, but those thirsty for satire will gulp down this little book ... McEwan writes the sort of scathing retorts and witty repartee we wish we could think of in the heat of battle. On a broader scale, his portrayal of the symbiotic relationship between politicians and journalists is as damning as it is comic ... This is a dark morality tale in the spirit of Evelyn Waugh's best work.
Read Full Review >>
Rave Gabriele Annan,
The New York Review of Books
... an intricate satirical jeu d’esprit and topical to the point of Tom Wolfeishness. It is also funnier than anything McEwan has written before, though just as lethal ... a thriller as well as a farce, with a plot whose extreme convolution and plethora of unlikely coincidences reads as a sendup of the thriller genre ... McEwan is among the most idiosyncratic of British novelists, even if he doesn’t seem interested in experimental writing. His prose is precise and revelatory, and whatever he writes about comes up fresh, luminous, and surprising, like a familiar painting recently cleaned ... The contrast between McEwan’s superclean prose and lay-preacher stance on the one hand, and his steamy, ghoulish, tender, sometimes even mawkish subject matter and moods on the other, make him dangerously attractive and repellent at the same time.
Read Full Review >>
Rave Charles Wyrick,
BookPage
Ian McEwan writes like no one else. As his newest novel Amsterdam shows, McEwan holds few peers ... Amazingly lucid prose aside, the power of Amsterdam lies in McEwan's devilishly clever narrative plan. He somehow manages to draw suspense out of two men's professional and personnel breakdowns, revealing a twisted horror story lurking underneath a tale seemingly meant to address undying friendship and love ... By utilizing alternating chapters and dueling points of view, McEwan develops his study in friendship into a dark psychological portrait of descent. There is true genius not only in McEwan's plan for Clive's and Vernon's stories but also in their relationship to each other and to the plot ... McEwan's adroitness at characterization and his deftness at dialogue show through these astounding chapter-length psychological studies. As author, he handles the transitions between his two characters' view points with astounding stylistic assurance ... All in all, this relatively short novel supports great writing with a masterful narrative design.
Read Full Review >>
See All Reviews >>
SIMILAR BOOKS
Fiction

Mona at Sea
Elizabeth Gonzalez James
Positive
What did you think of Amsterdam?
© LitHub | Privacy