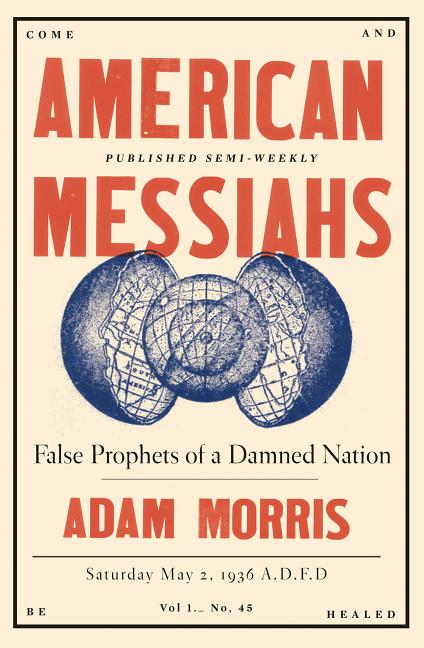 Mania surrounding messianic prophets has defined the national consciousness since the American Revolution. After years of studying these emblematic figures, Adam Morris demonstrates that messiahs are not just a classic trope of our national culture; their visions are essential for understanding American history.

What The Reviewers Say
Rave Kevin O'Leary,
Los Angeles Review of Books
... an impressive cultural history ... The book’s real value comes in its...profiles and Morris’s ability to show how these fringe religious movements gave refuge to people fleeing America’s hard-driven commercialism and provided a safety value to societal stress that, in other countries, might take on the tone of political protest against injustice ... If you are a regular reader of more traditional American histories, you might think that Morris is telling the story of sinister cults across America. Not so. With a sympathetic view of the messiah phenomenon, his stories present a portrait of life on the American fringe that, while definitely odd, is not frightening—at least not until the horror story of Jim Jones ... For a glimpse of life on the religious edge that reflects America as a whole, American Messiahs is a valuable guide.
Read Full Review >>
Positive Molly Worthen,
The New York Times Book Review
... Adam Morris offers up some truly strange historical characters ... gripping ... Morris shows that these oddball spiritual liberators are not just historical footnotes. They reveal society’s fundamental themes and contradictions.
Read Full Review >>
Mixed Tom Bissell,
The New Yorker
[Morris is] a fine writer of prose, with an instinctive feel for storytelling and a genius for quotation. One senses while reading this book the ghost of the proposal behind it—the promise of a smart, revisionist take on American messianic movements. But that message is often muddled, not least because Morris is too entertaining a writer to keep from dunking on his subjects ... The two most darkly significant messiahs Morris writes about are also most indicative of what’s wrong with this otherwise fascinating book ... Throughout the book, Morris is so intent on pointing out the good done in spite of his messiahs’ beliefs that he rarely lingers on the lasting harm done to those who believed in the messiahs themselves. This winds up making the book appear to argue that these messiahs attracted followers because they were anti-capitalist visionaries and not because they claimed to be living gods ... Has the Jim Jones rehabilitation moment arrived? ... Still, Morris is onto something.
Read Full Review >>
See All Reviews >>
What did you think of American Messiahs: False Prophets of a Damned Nation?
© LitHub | Privacy