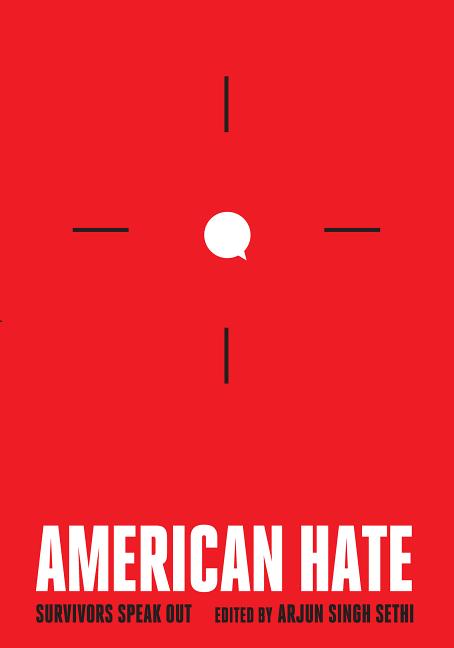 A diverse group of minority Americans—from college students to refugees—narrate harrowing experiences with racist violence that has ramped up after the campaign and during the Presidency of Donald Trump, whose vitriolic rhetoric and failure to speak out against white supremacists has emboldened racists and hate groups.

What The Reviewers Say
Rave B. David Zarley,
Paste
American Hate gives voice to the only people who matter: the survivors of hate crimes in America. It wrestles the microphone away from the frogs and Nazis, dedicating its pages to true tales of violence and hate. Aside from an introduction and constructive conclusion, even editor Arjun Singh Sethi barely exists between American Hate’s covers ... In choosing to tell the stories in the survivor’s own words, Sethi removes American Hate from the realm of journalism and places it squarely into testimony. By leaving each story in the hands of the survivors, he ensures their agency and empowerment. This is collection as corrective, a black and white anodyne. Sethi ensures the reader’s empathy, providing portrait after portrait of human beings—not victims or soundbites ... it should be required reading for schools, for workplaces, for anyone and everyone who has never been etched by the acid blood which runs through this alien nation. American Hate is the new testament which rends the shroud; it is powerful, it is crucial, and we must act to ensure it never needs to be written again.
Read Full Review >>
Rave Martha Anne Toll,
NPR
Amid the ugly realities of contemporary America, American Hate affirms our courage and inspiration, opening a roadmap to reconciliation by means of the victims' own words ... Read American Hate for the faces Sethi puts on our national hate epidemic, and for his sobering account of the fallout—humiliation, terror, injury, and death. But read American Hate, as well, for what the last chapter terms 'Hope in a Time of Despair.' Hate may be rampant in America, but so are its antidotes: We must understand and own our history. We must speak out, for in community is power and love.
Read Full Review >>
Positive Catherine Lizette Gonzalez,
ColorLines
American Hate recounts the material consequences of hate violence and provides a tool that can empower communities to fight back ... Throughout American Hate, survivors testify to the outgrowth of hate that has emerged from America’s violent history and the virulent racist policies of the Trump administration. In response, Sethi offers possible solutions: to prosecute hate incidents as criminal acts; to give funding for victims of hate, and to treat hate as a public health crisis that affects not just individuals, but also communities; and to support local grassroots movements ... Sethi calls on us to reckon with our country’s violent past.
Read Full Review >>
See All Reviews >>
What did you think of American Hate: Survivors Speak Out?
© LitHub | Privacy